MAD reveals its proposal for the “Southbank by Beulah” tower competition. Defying the typical glass, box-like buildings of Melbourne that appear detached from the city’s historic parks and natural local terrain, MAD’s organic design introduces a silhouette of natural forms – mountain, tree, cloud – into the dense city center, offering a distinct and iconic scheme for the skyline, that reconnects citizens with nature. 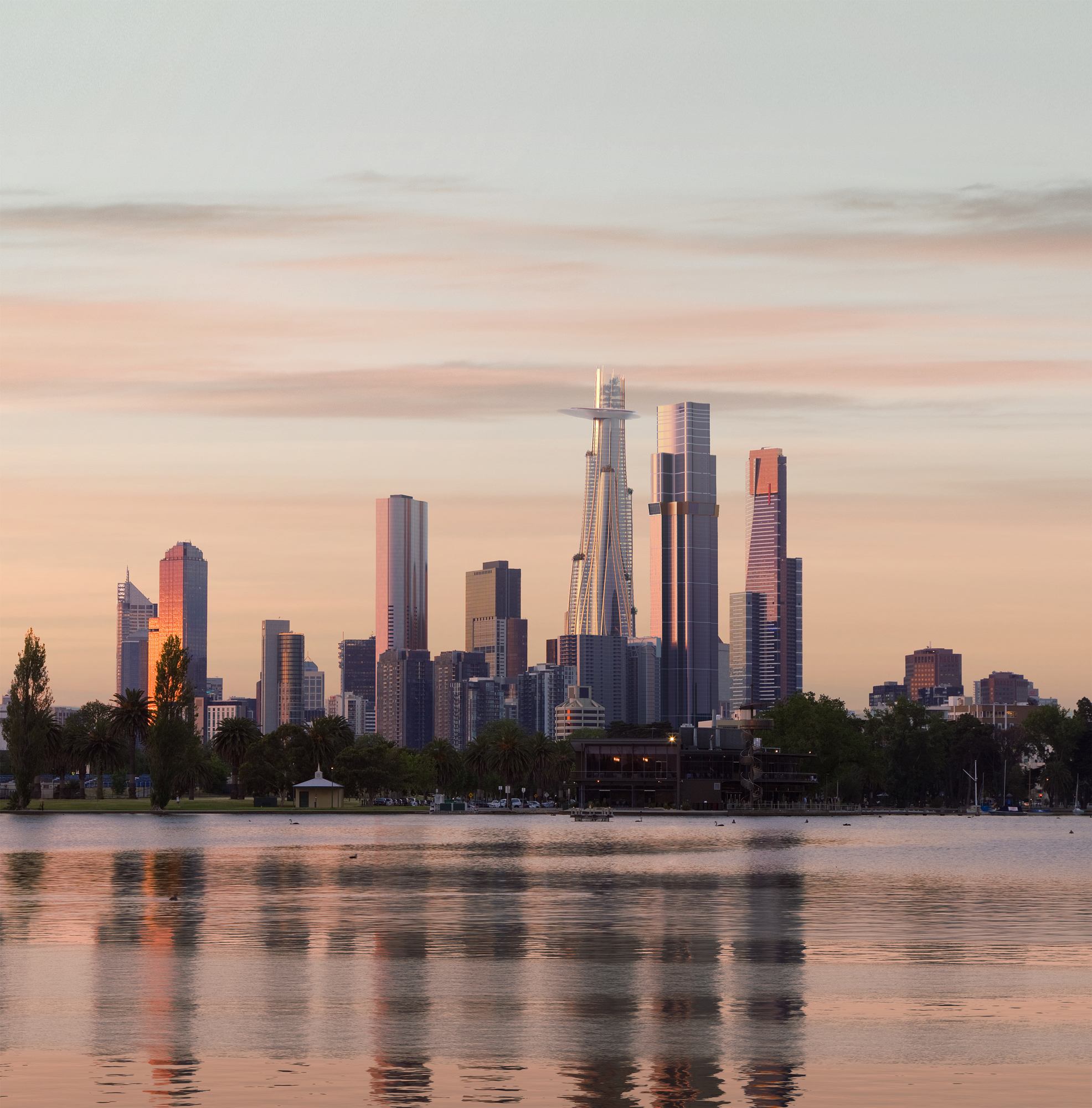 Selected as the only firm from Asia by Beulah International, MAD is competing alongside BIG, Coop Himmelb(l)au, MVRDV, OMA, and UNStudio to conceive a mixed-use program of more than 220,000sqm for the heart of Melbourne – a piece of urban infrastructure that re-thinks the commercial, residential, retail, and public spaces of the city – along the city’s prestigious waterfront precinct. 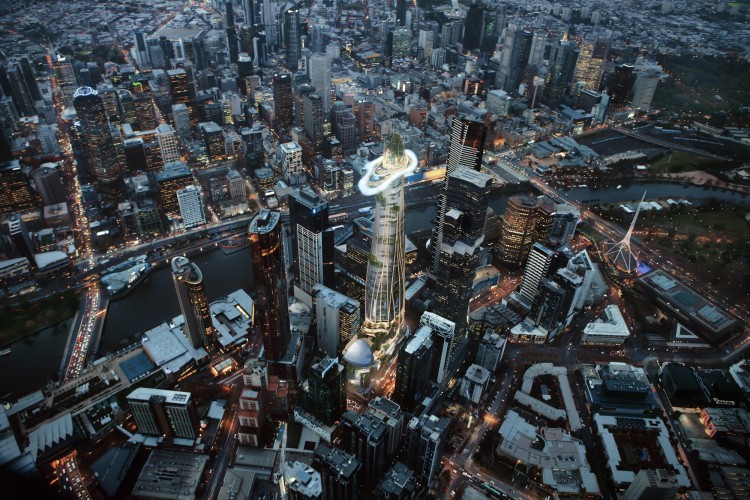 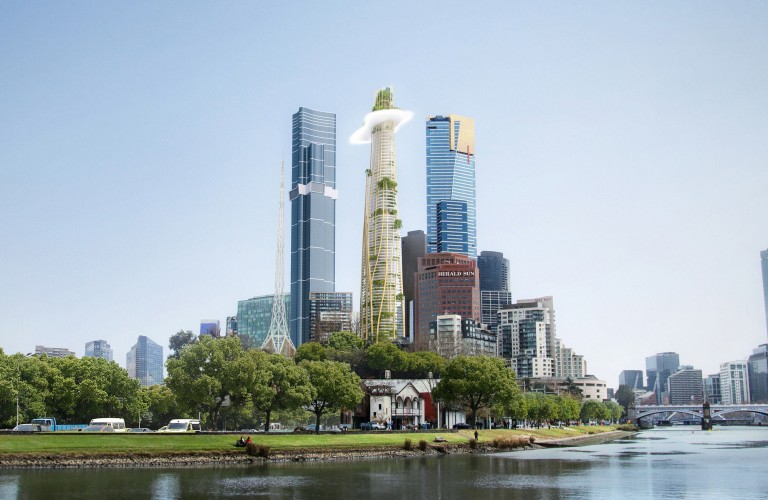 Located at the corner of City Road and Southbank Boulevard, the site is positioned in a dense part of Melbourne’s downtown core, surrounded by a number of other existing towers facing one another. Carefully studying the tower’s site and composition, we propose a one-tower strategy to avoid over-crowding, provide the surrounding high-rises with open sightlines, and maximize views from the residential and hotel programs on the upper floors. 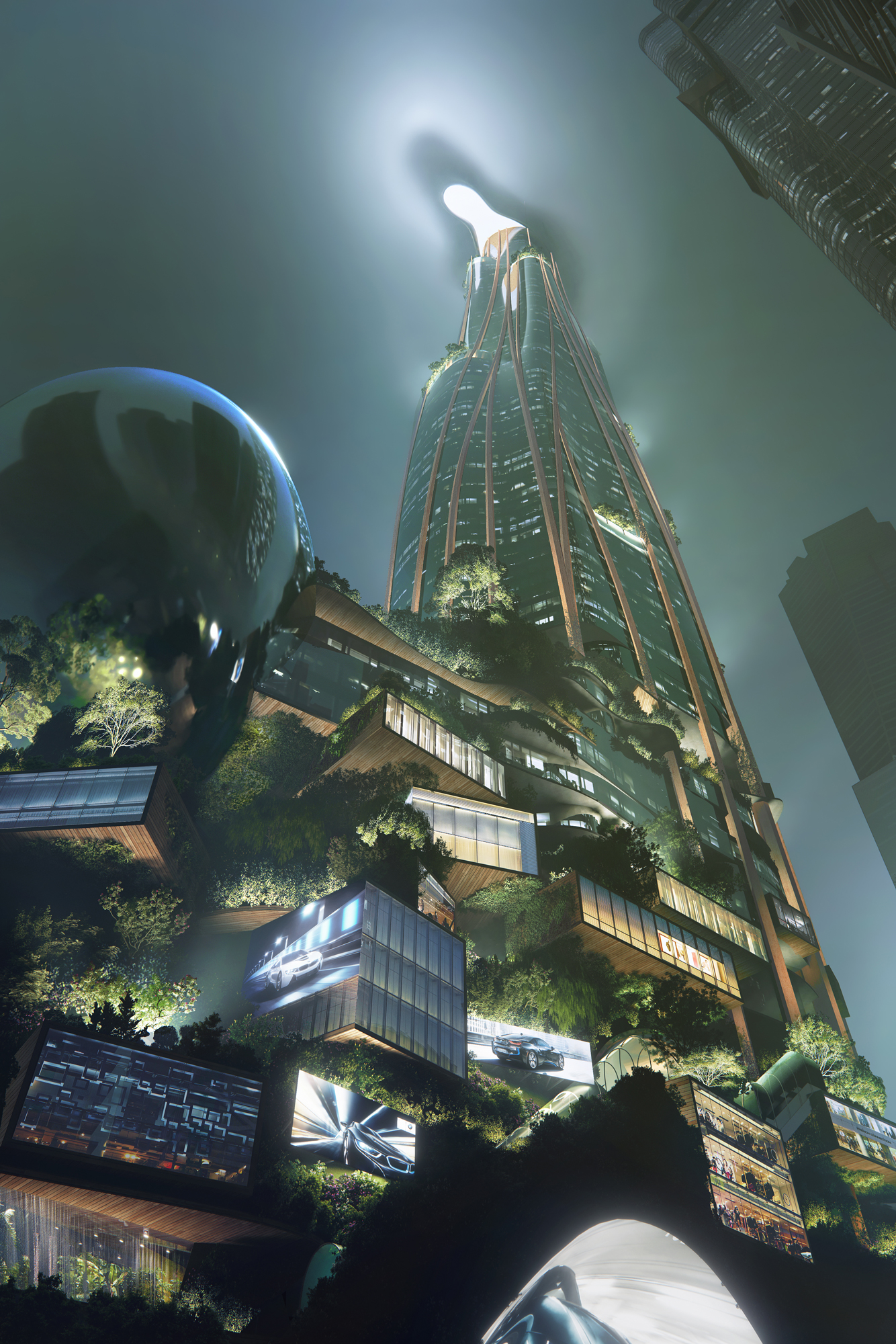 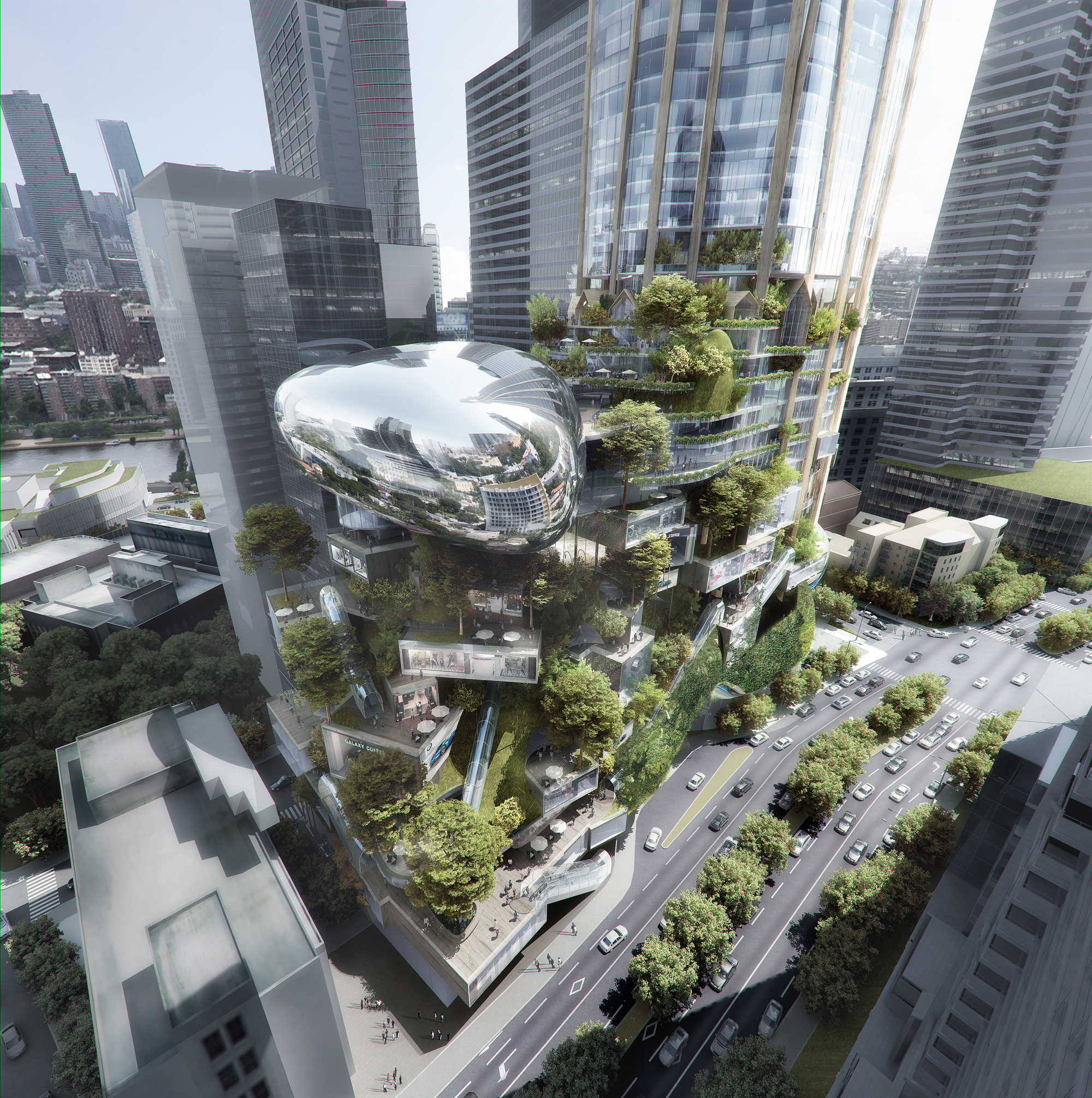 At podium level, we break down the typical massing of a retail/mall space, and introduce a human-scale, ‘mountain village’ that invites passersby to explore. Urban spaces are stacked vertically, and landscaped with lush green walls and trees to give visitors and residents alike, the feeling that they are in nature, rather than in the middle of the city. The tower rises up out of the village like a tree. Clad in transparent glass, it boasts an innovative wood façade structure (Glulam) that appears to be roots twisting upwards, reinforcing the tower’s organic shape; with sky gardens interspersed throughout that vertically extend the urban green. 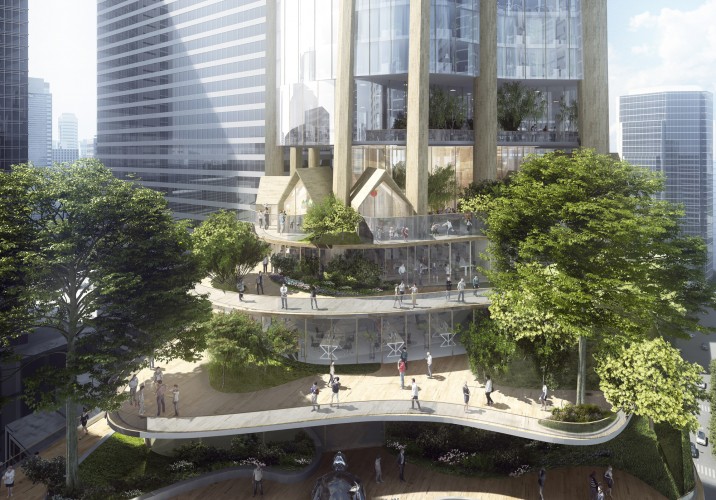 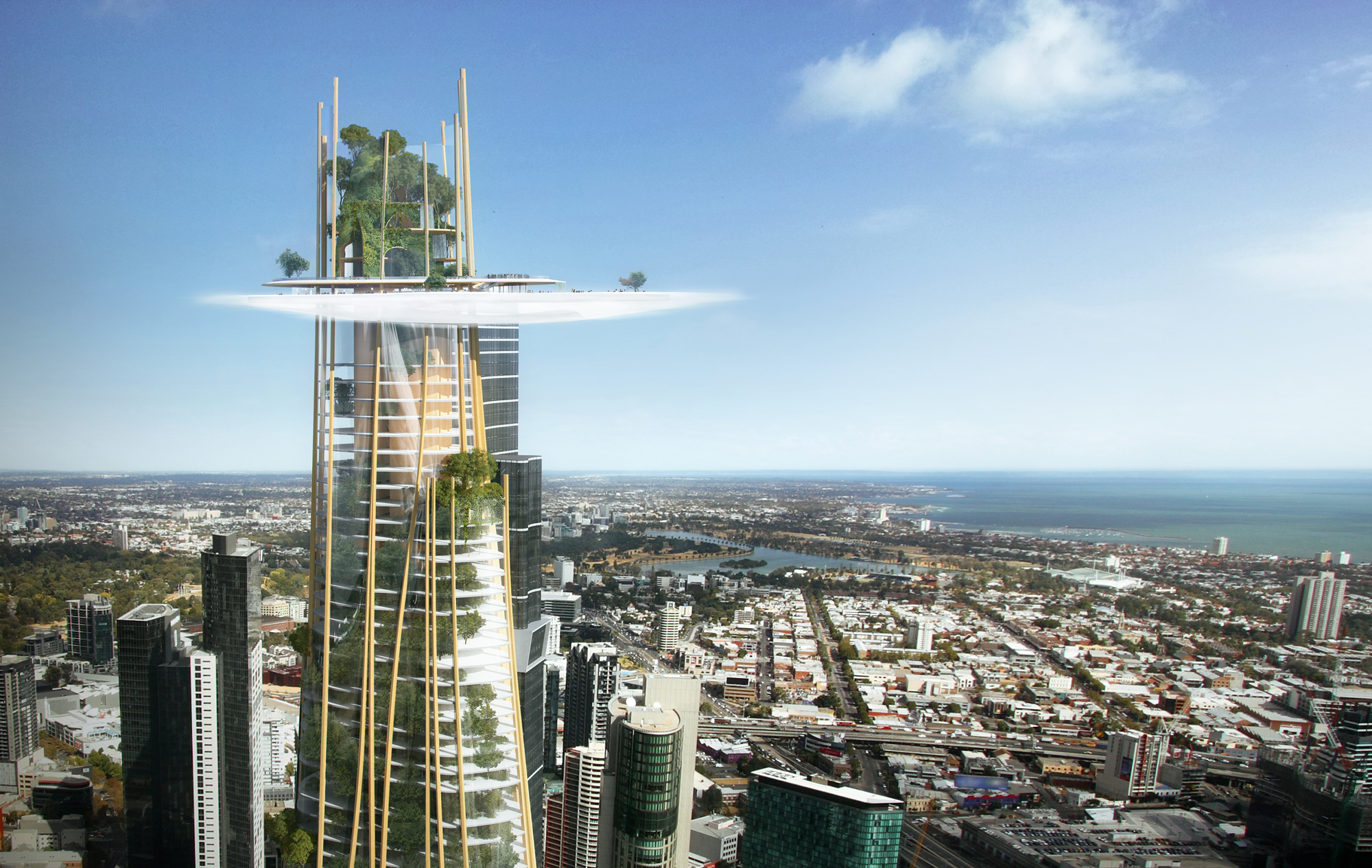 The pinnacle of the design is ‘the cloud’ – a cantilevered structure that houses the public amenities for the hotel (lobby, restaurant, bar, and observation deck), and offers 360° views of Melbourne. Composed of an ETFE membrane façade, it is lightweight and features varying degrees of transparency. Towards the edges, ‘the cloud’ becomes translucent, emulating a real cloud so that it gives the sensation of air and lightness, becoming a blur as it blends into the sky. 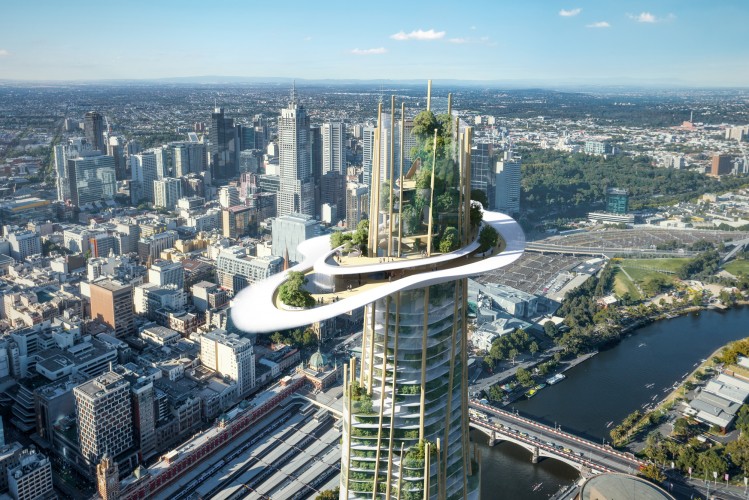 At street level, our tower maintains a cohesive design language with the Southbank Boulevard transformation. We replace the existing harsh, unfriendly experience, with an inviting plaza landscape that integrates urban activation spaces, and revitalizes the street level in a way that encourages people to gather and linger. Conceived as a series of small, green foothills that lead pedestrians up to the ‘mountain village’, our scheme links the ground plane to the building. 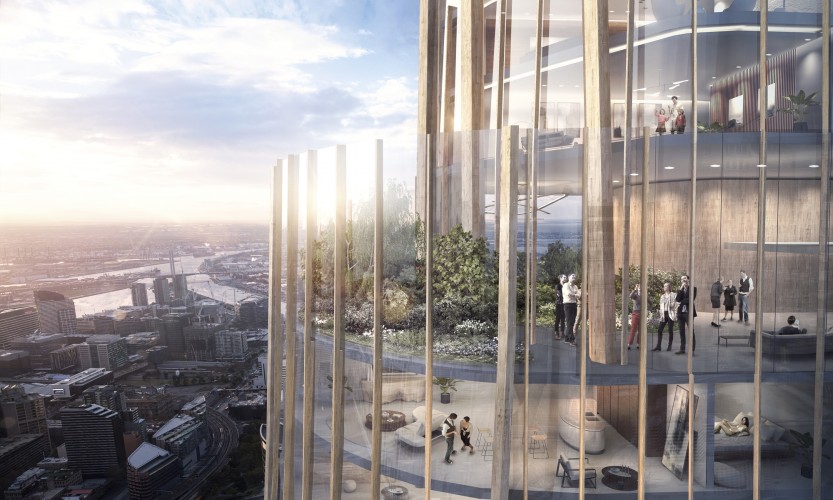 We bring nature into the urban context, by remodeling the typical high-rises found in our cities. Materializing as a ‘mountain in the city’, our design establishes open connections between the interior and exterior spaces in the form of large terraces, gardens, and public art zones 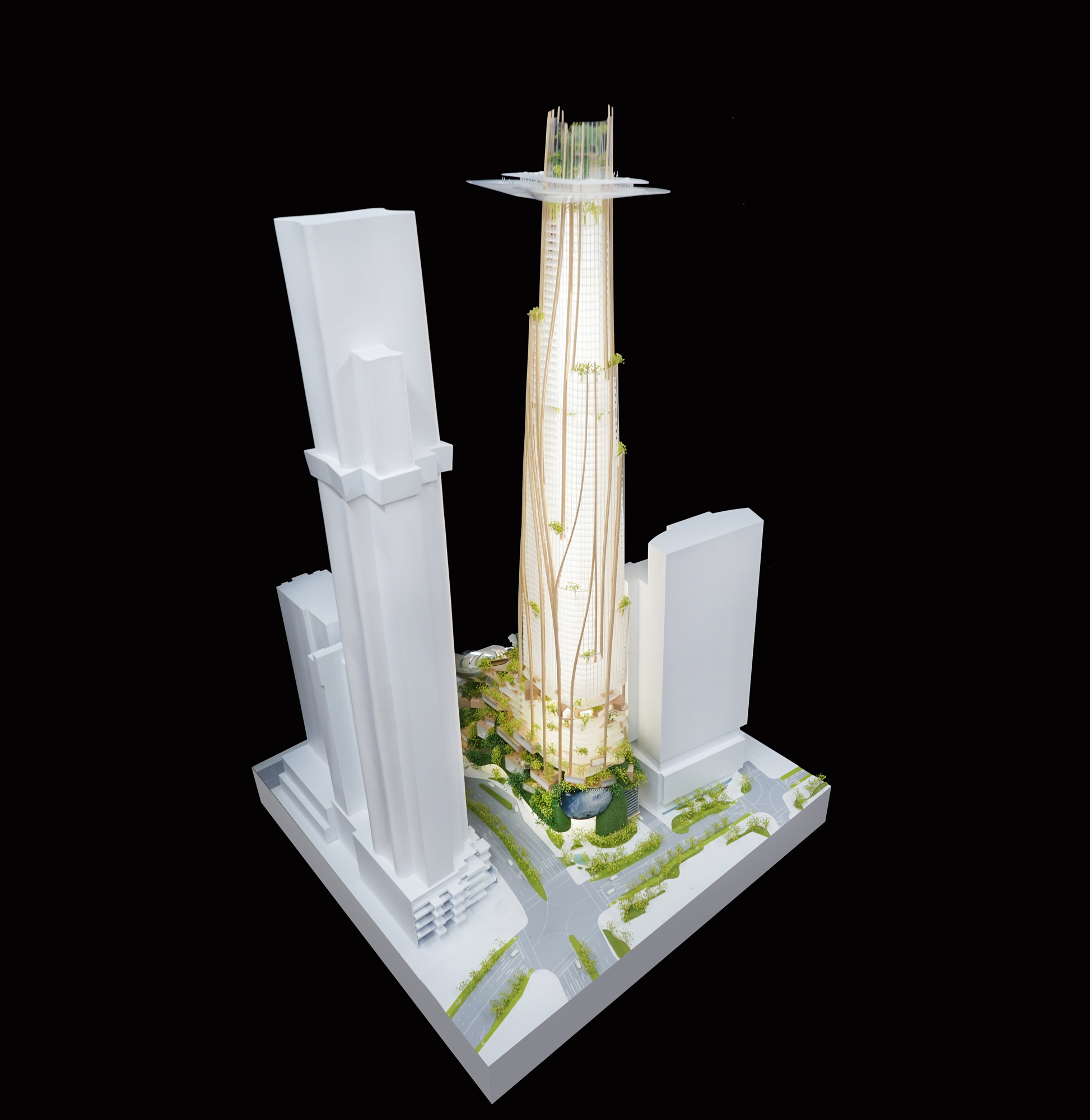 The results of the “Southbank by Beulah” tower competition will be revealed on August 8th, 2018.