Competitive sports has a history that is practically as old as human civilization. Born from humanity being faced with the great unknown, brought on by physical nature, it became a means for one to reflect on their own existence and cognition of function, proving their physical capabilities and striving to explore and further push one’s limits. To some extent, the competitive spirit it represents catalyzed modern society – between people, between enterprises, between cities and between countries – becoming a catalyst for progress and positive growth, but it has also brought on some disadvantages.

When designing a stadium (or several stadiums), the building should convey the essence of “a place where people gather and engage in exercise”, masking the strength and muscle of the arena. Furthermore, the design should be derived from the architect’s vision for the city, bringing both the competition among sports stars and the physical activity of people’s daily lives, together. The buildings and the architectural techniques should dissolve into human behaviour and humanity’s greater spiritual pursuits, to inspire the birth of a new urban civilization. 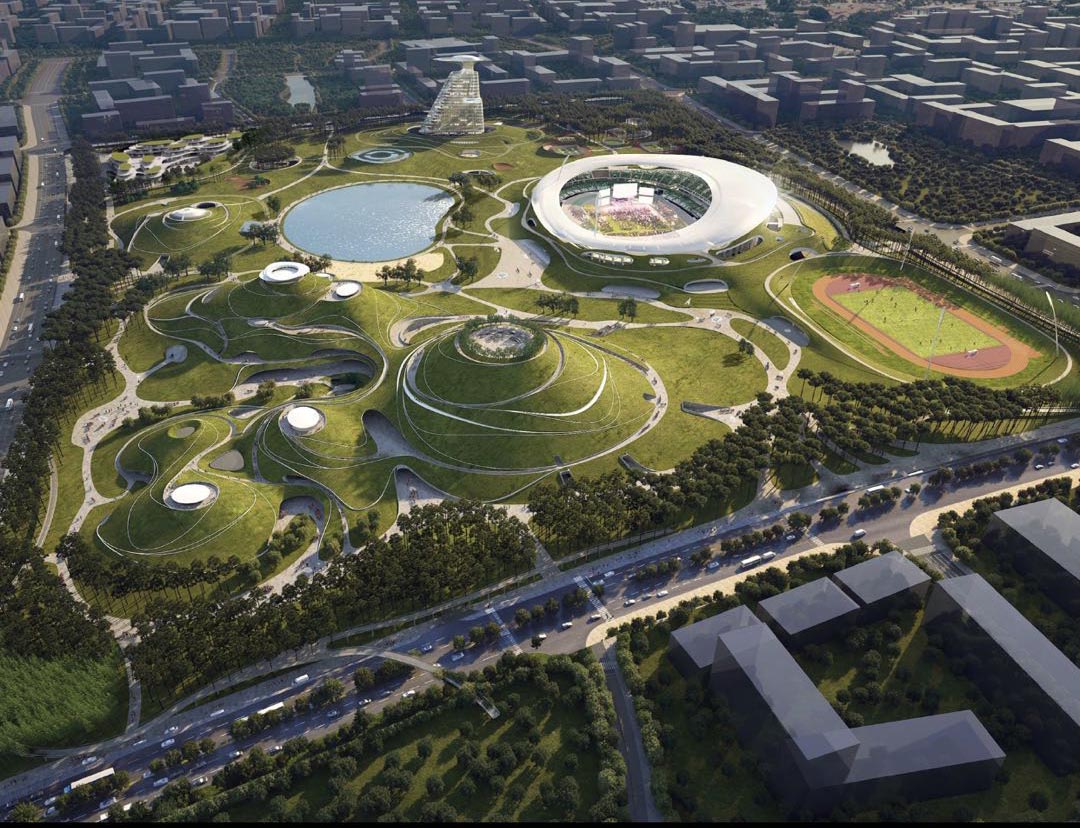 MAD Architects, led by Ma Yansong, is building a vanishing stadium as part of its larger “Quzhou Sports Campus” project. Located in Quzhou, in China’s Zhejiang province, the park covers an area of 570,000 square meters, of which the total building area of the stadium complex and supporting facilities is 390,000 square meters. The park includes a 30,000-person capacity stadium, a 10,000-person capacity gymnasium, a natatorium, outdoor auxiliary training grounds, athlete service and experience center, as well as a science and technology museum and children’s place.

The project’s overall design has been finalized and is now under construction, with the first phase, the stadium, to be completed in 2021. Upon its entire completion, “Quzhou Sports Campus” will become the world’s largest earth shelter building complex. 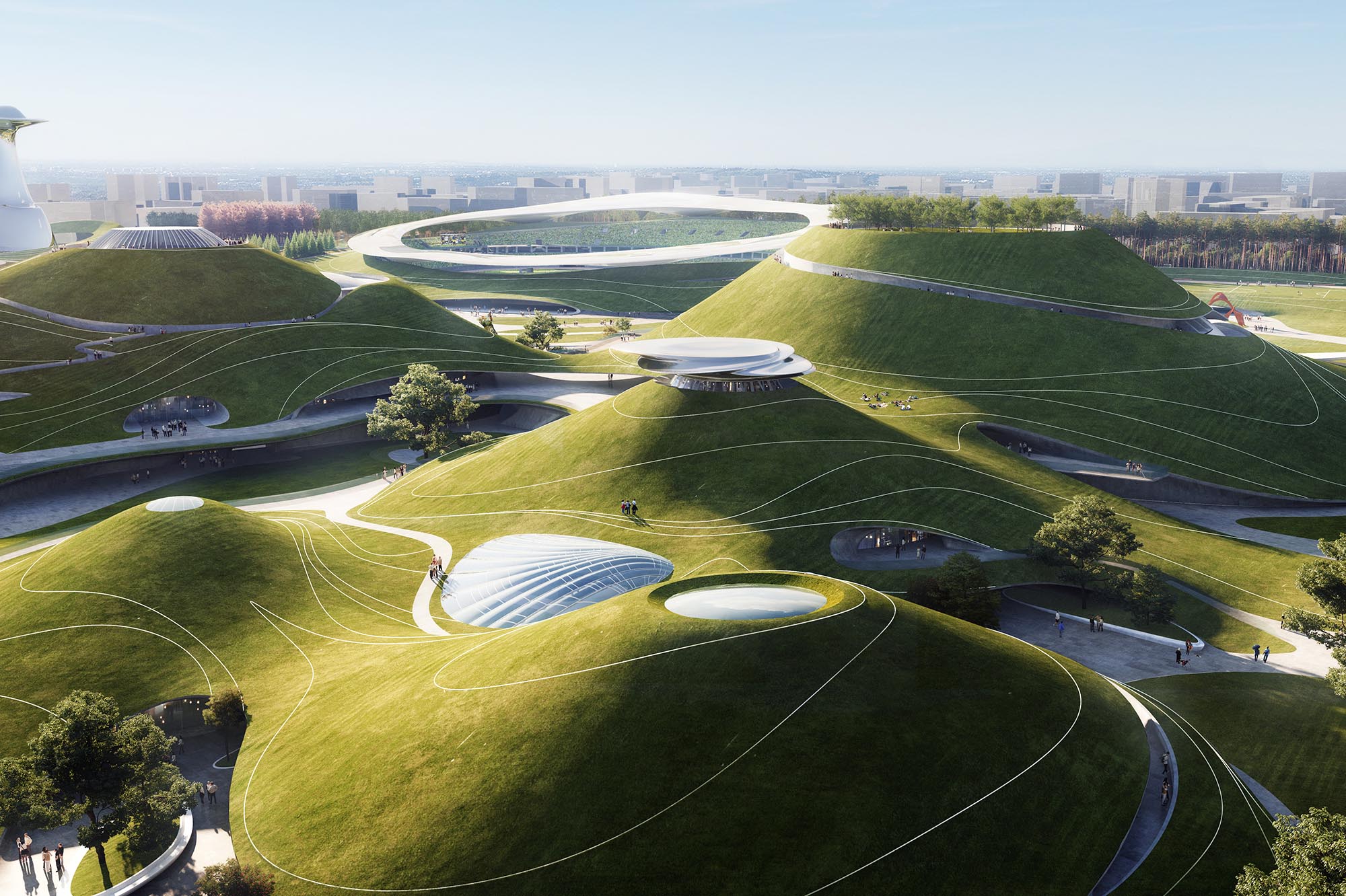 Quzhou is a well-known cultural city with a long history and beautiful natural scenery, with 71.5% of its land covered in forest. The site of the project itself has natural slopes and lush vegetation. MAD’s scheme for the sports park takes into consideration the plot’s existing characteristics by respecting them to the fullest, regarding the culture of the city, the relationship between its buildings, and the relationship between the buildings and the city boundaries. 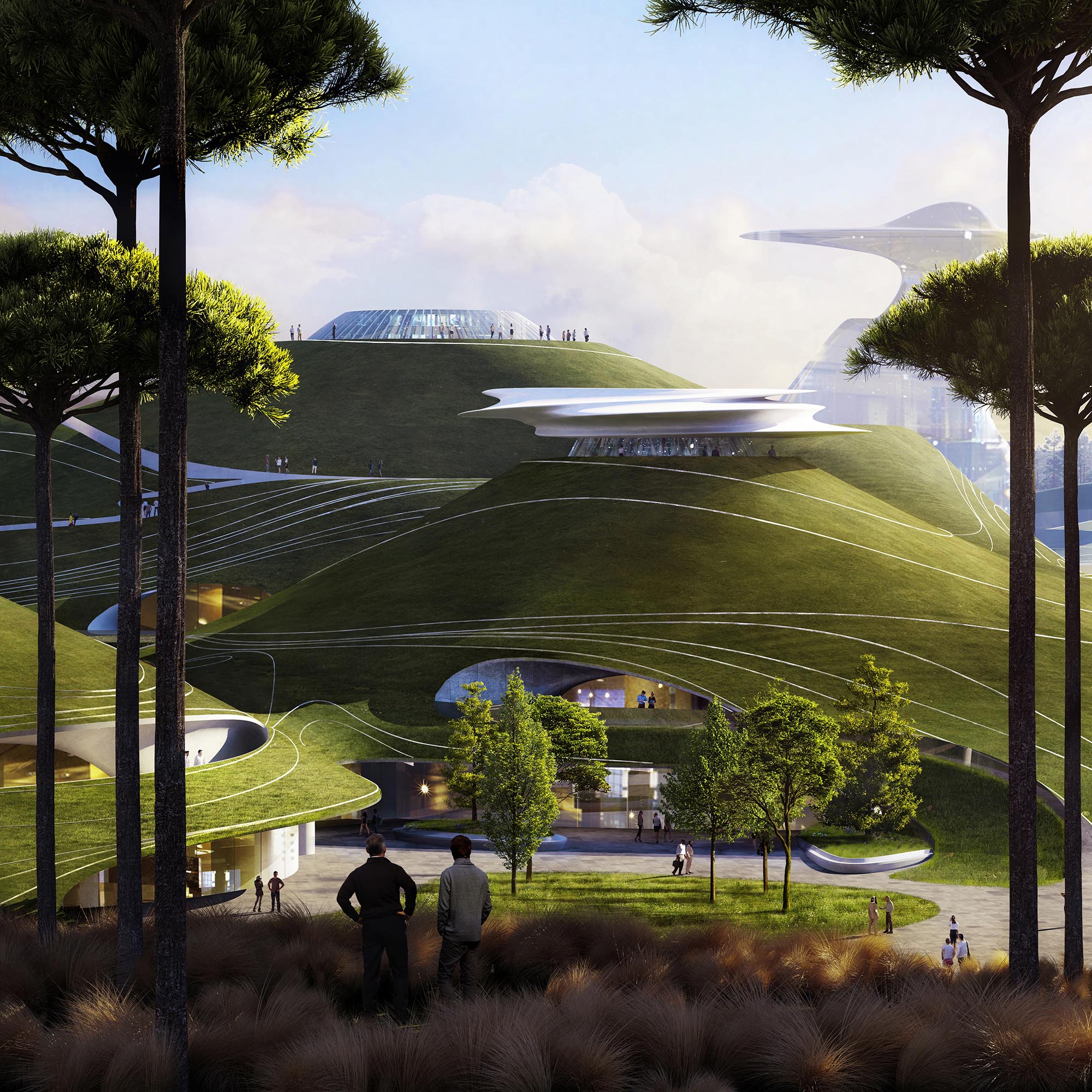 The buildings are embedded into the ground, whereby the façade disappears into the terrain, covered by greenery so that it becomes the landscape itself. While contours engrave curves into the surface, some function as pedestrian walkways. Thus, the sloping façade naturally serves as a new place for citizens to engage in exercise, and offers the opportunity to ‘climb’ the architecture. The lawn also provides a place where people can relax after their sports, introducing a new public green space in the city.

The colossal sports venues and expansive park have been imagined as a cohesive scene, whereby the winding trails compliment the sloping land. Envisioned as an earth landscape, the three dimensionality of the design is scattered and softly layered. Throughout the campus, there are multiple platforms integrated for people to enjoy the park’s beauty from different perspectives. At the same time, the skylights of the various athletic facilities not only introduce natural light into the interior spaces of the buildings, but also serve to function as alternative lookout points for citizens once they have traversed the buildings to their peak, breaking the boundaries between indoor and outdoor. 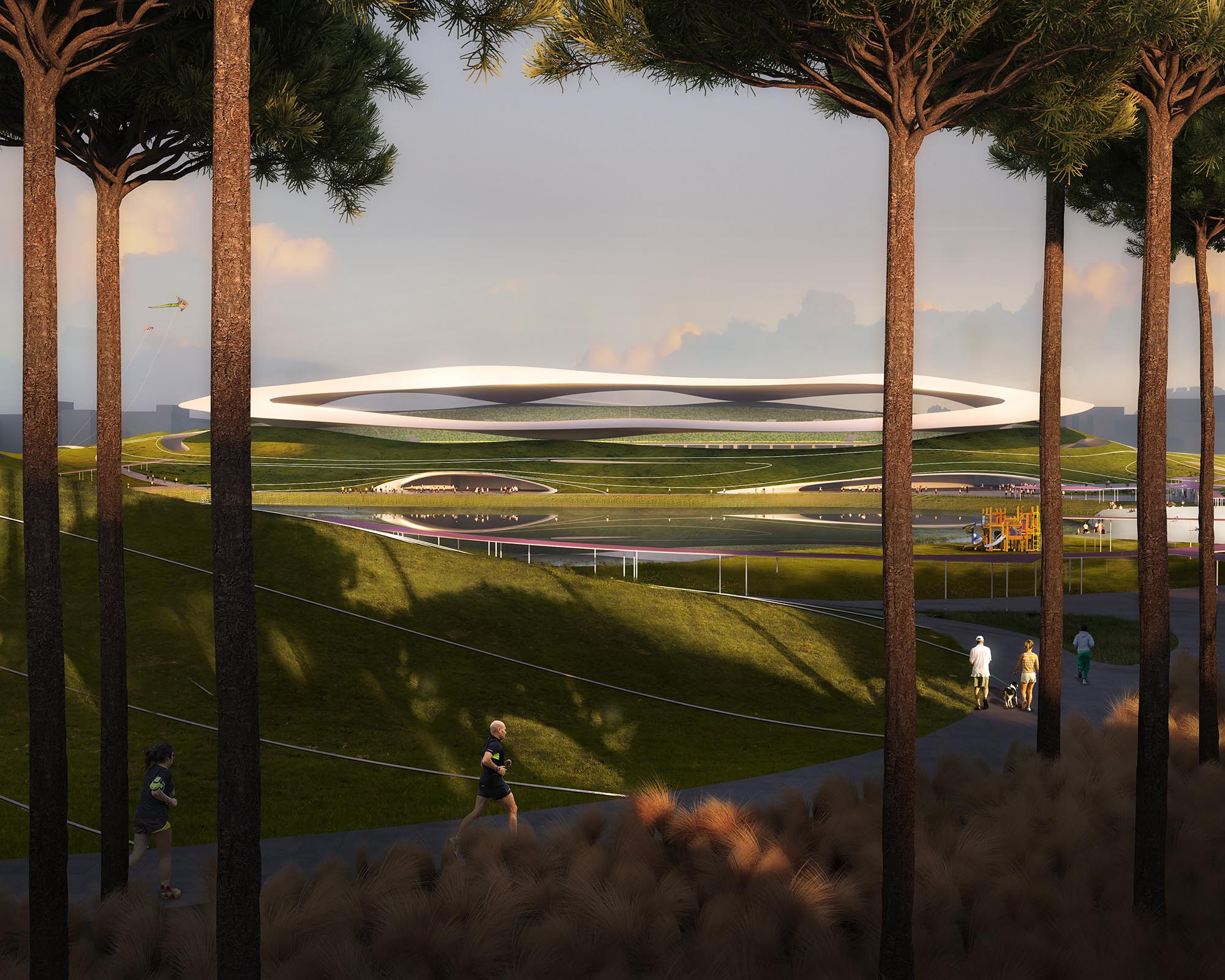 The enormity of the 30,000-seat capacity stadium is hidden. The volume of the grandstand structure recedes into the landscape so that its function disappears. Hovering above is a rain cover, that with outstanding visual effect, abandons the stereotypical design it would typically adopt. This is achieved through the material selection and the actual design of the structural nodes themselves, that while satisfying the practical functions of a rain cover, also achieves a new aesthetic purpose. It becomes an installation, such as clouds appear light and floating above the grandstand, that forms a reflection of the neighboring lake. For citizens jogging or walking the grounds, it creates a perfect transcendental harmony with its surroundings. 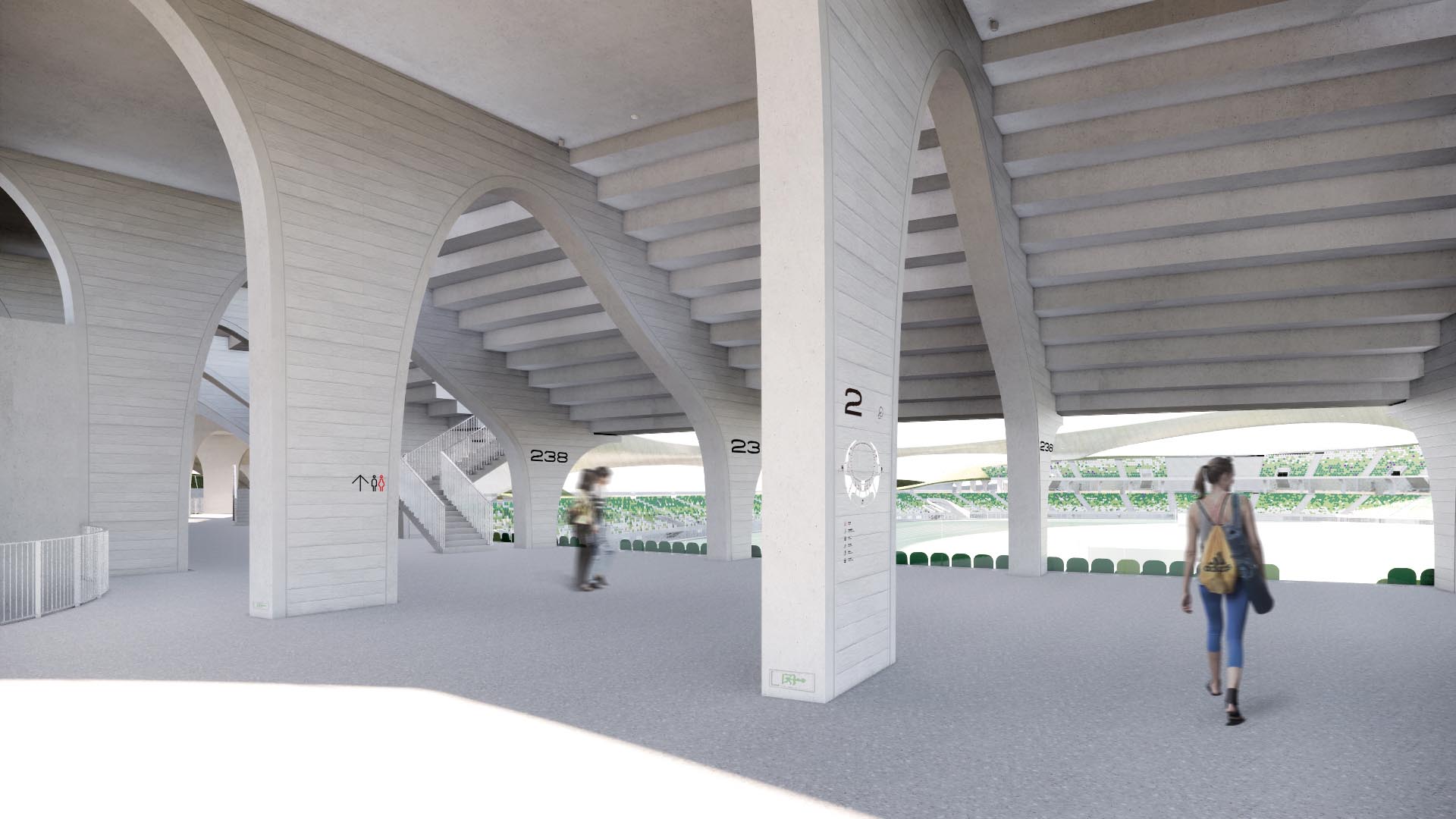 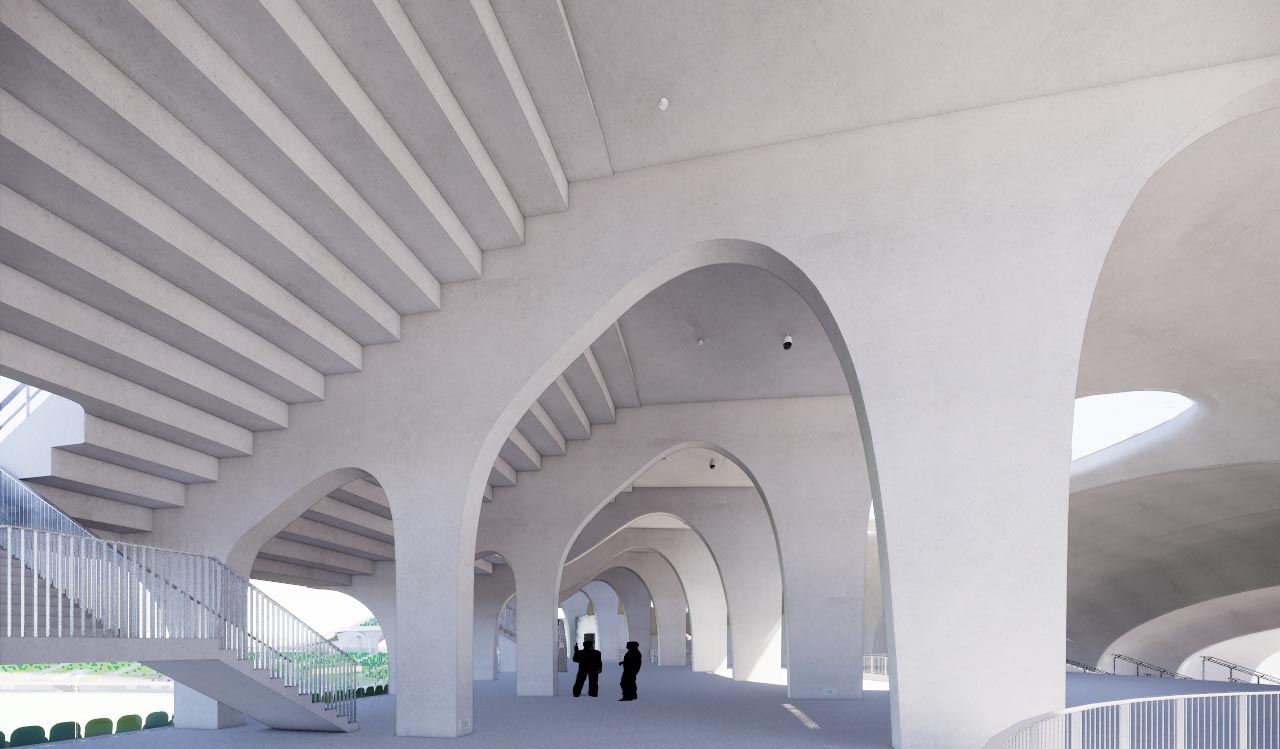 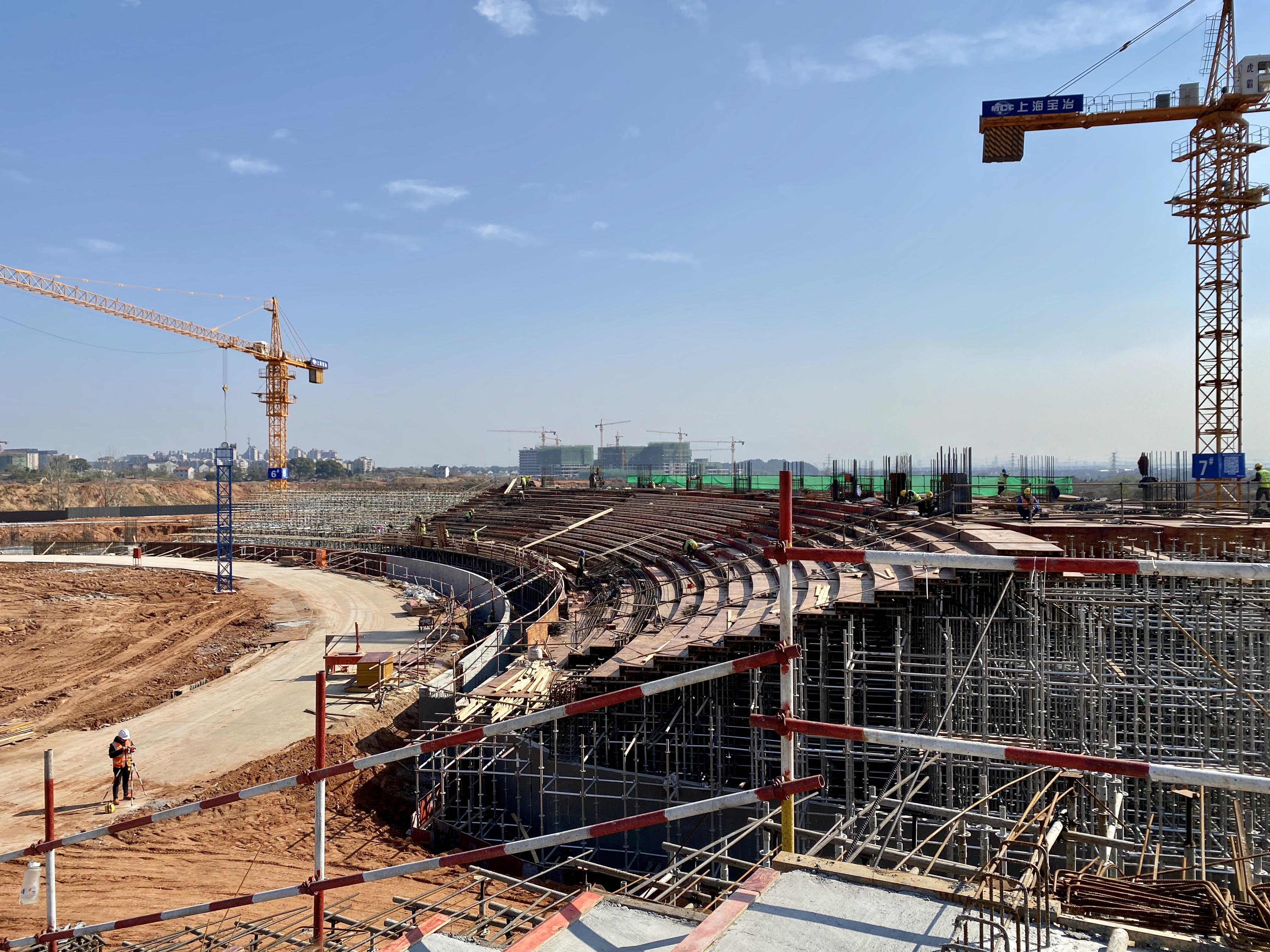 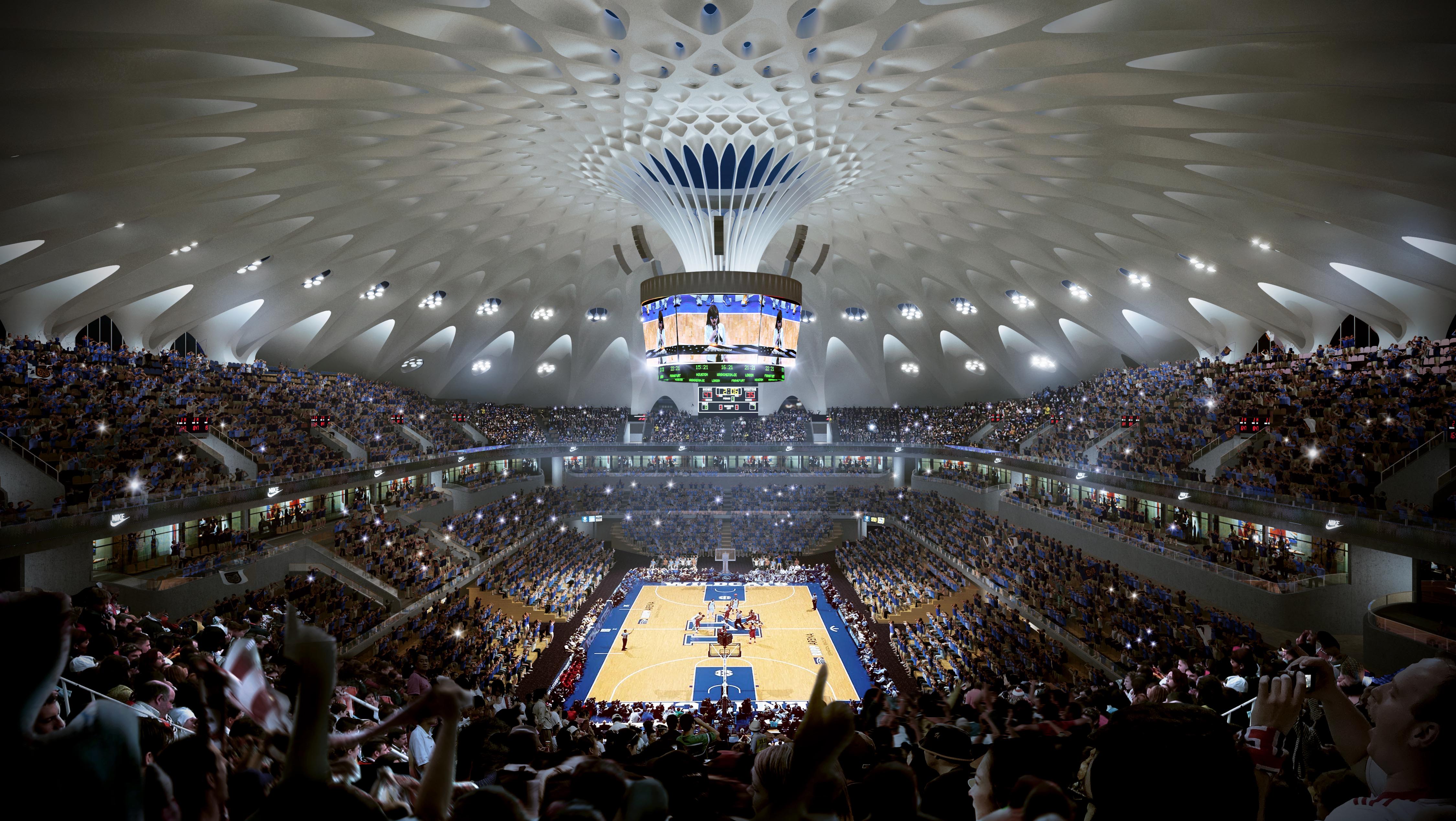 The internal dome of the gymnasium hides the design details inside the structure. The smooth roof encompasses a concrete shell that spans 130 meters. The sports lighting is integrated and embedded into the ceiling structure, ensuring simple but complete expression of the building’s structural beauty and performance. In addition, the rigorous design of the gymnasium has taken on special considerations in regards to its acoustics. 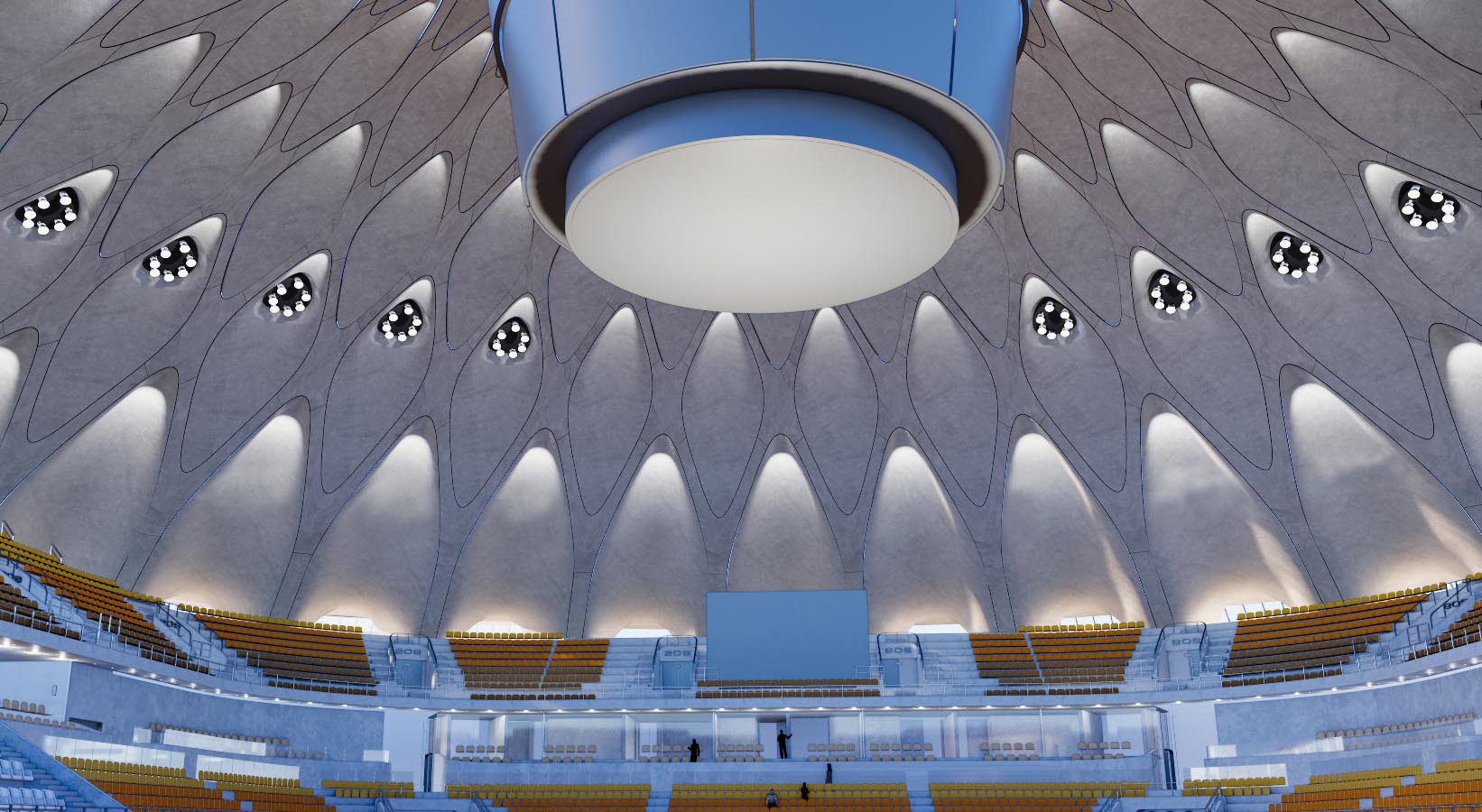 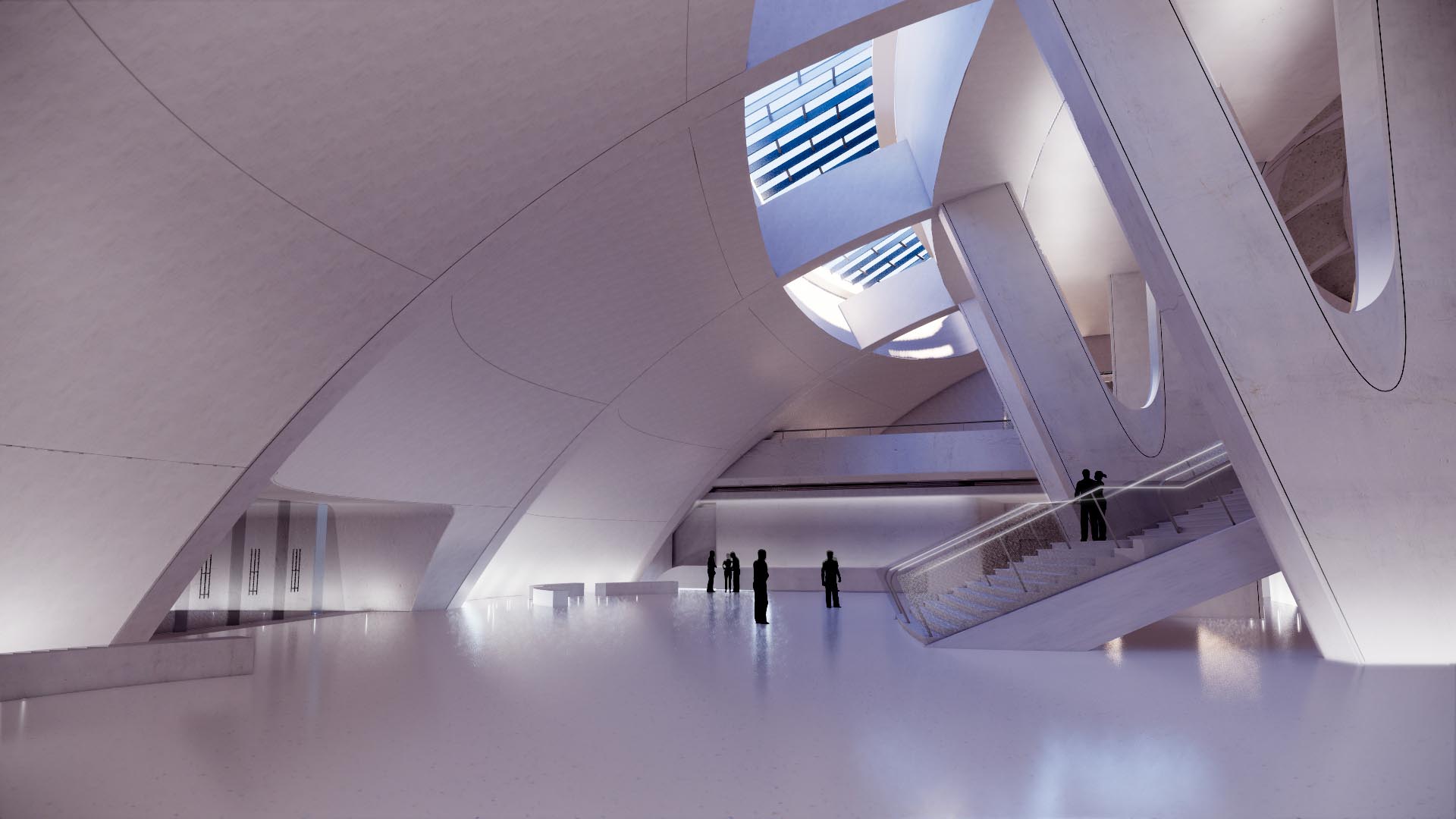 The design of the natatorium sees each key function of the space conceived as a separate bubble. Three bubbles are combined and aligned on an the axis that runs through their center, forming the overall space and structure of the building, creating a sense of sequence and feeling of continuous space. The perfect circular shape of the sphere, while referencing the building’s function – echoing the elements of water – has been applied for economic reasons, minimizing the cost of the structure. It is simple and pure in form, and eliminates the need to consider a new design logic for the interior.

The lighting details of the facility have also been carefully taken into account. The arc-curve arrangement has been determined on the basis of ensuring the lighting function. Echoing the simple and pure interior design concept, it emphasizes a sense of sequence, tracing the lines of the domed roof. Simultaneously, natural light is introduced into the interior through circular apertures in the ceiling. 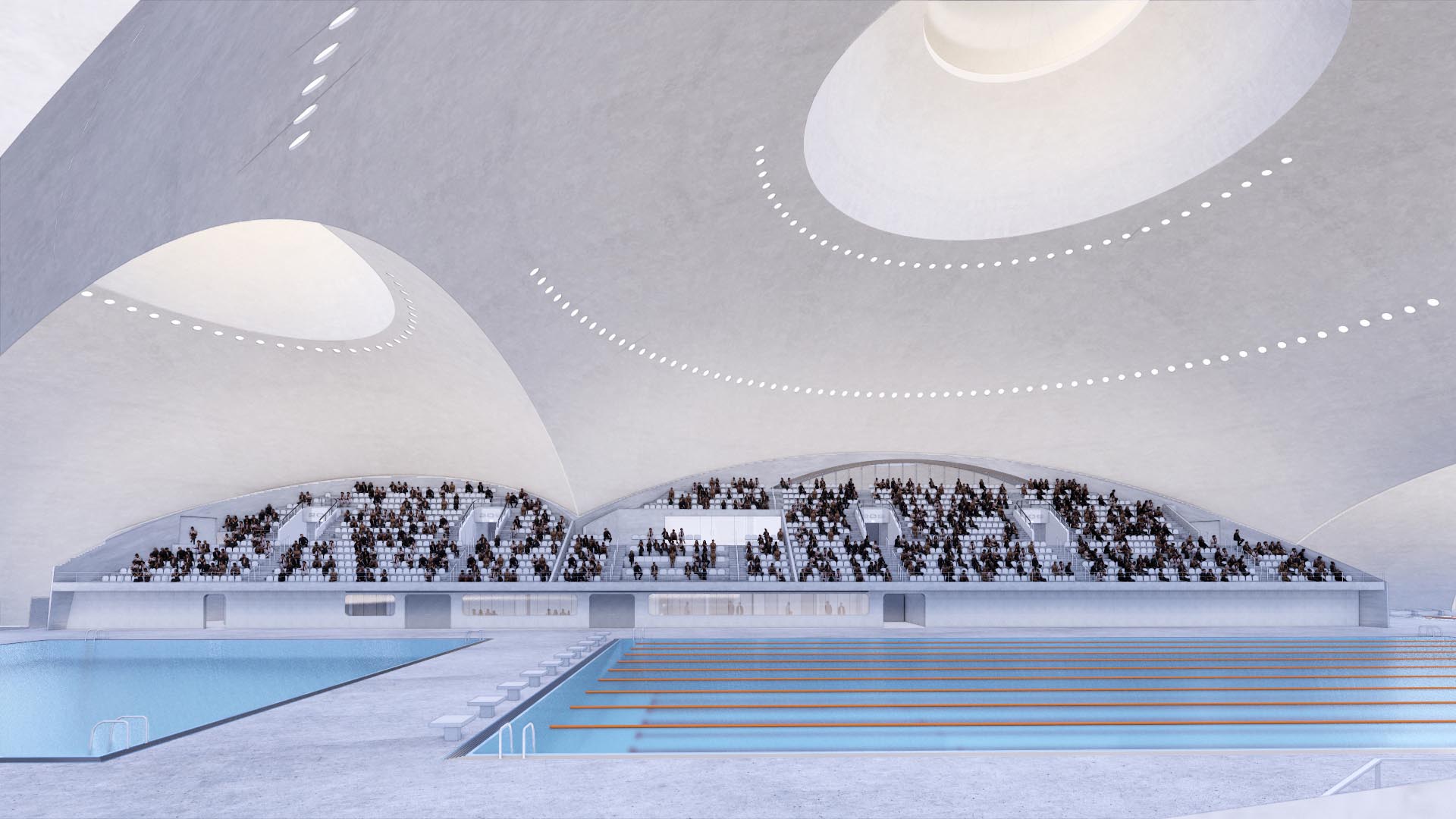 In planning the expansive sports campus, MAD has integrated many pedestrian walkways that interlace with one another, inviting citizens to leisurely explore the park. A large number of bicycle paths have also been introduced, acting as an extension of the urban roads through an express lane that allows daily commuters to pass through the park and its forested areas, and experience the beauty of nature. 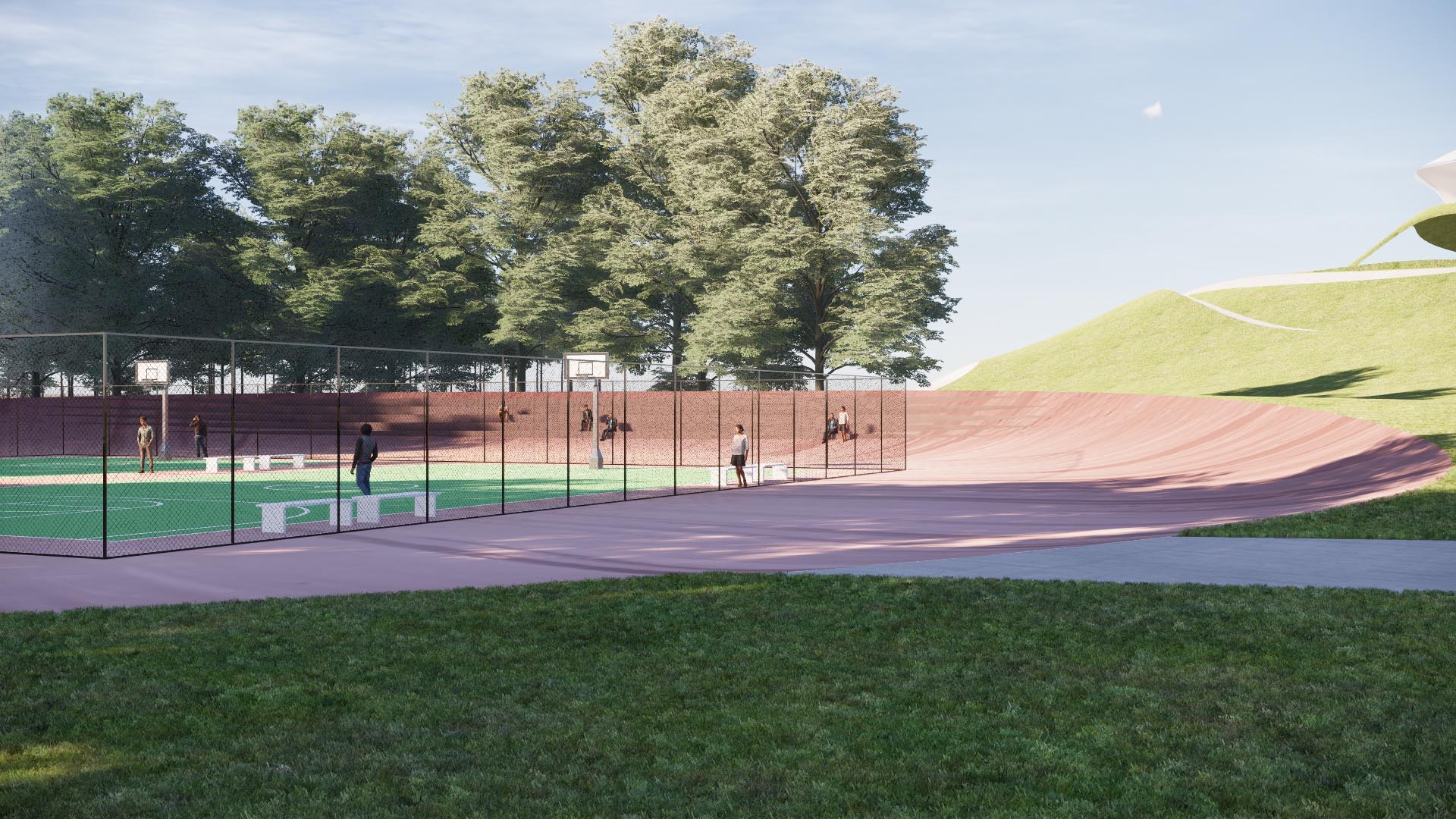 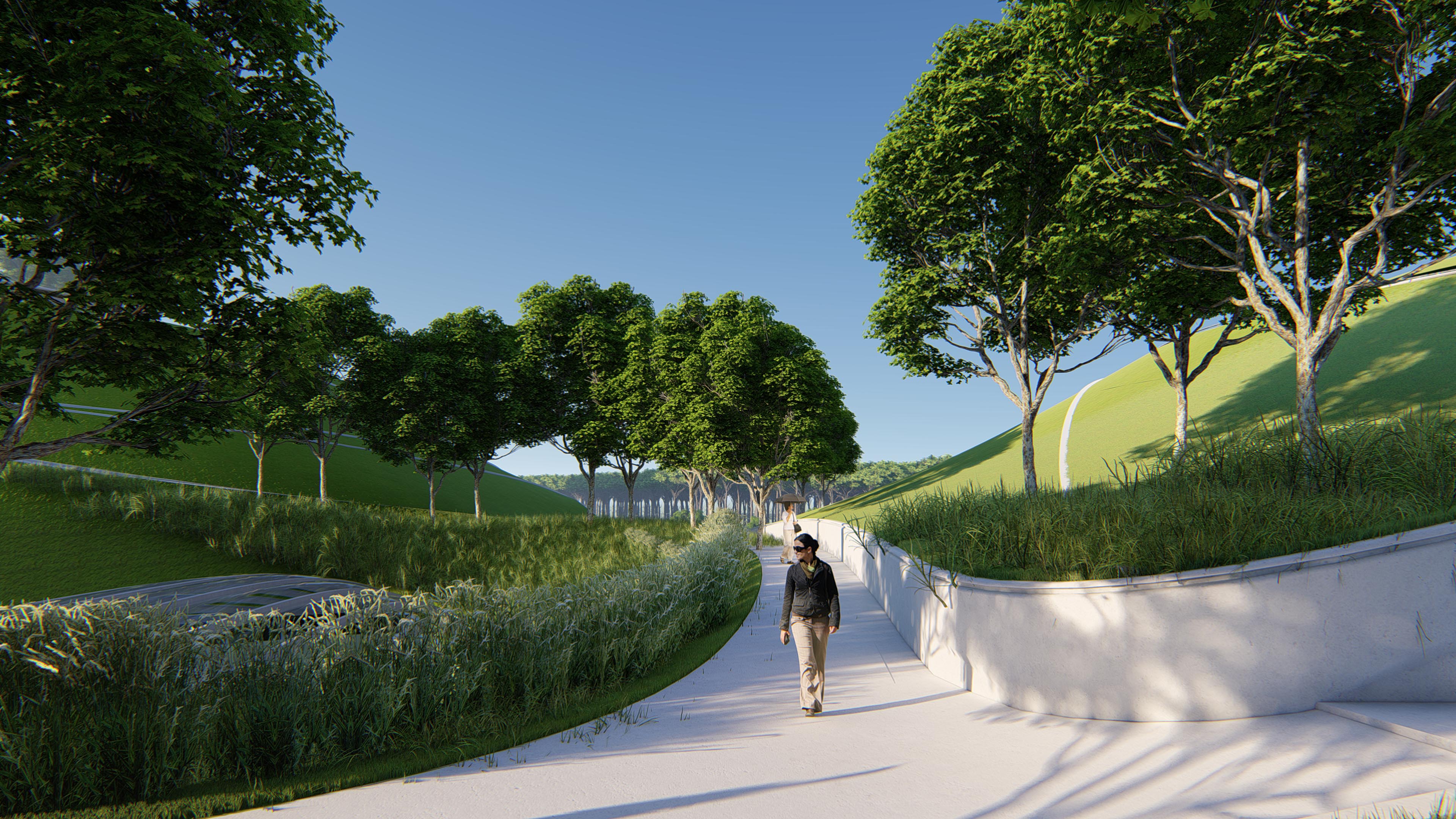 A fitness bike path surrounds the perimeter of the park, providing exercise areas and different pedestrian and bike routes that encourage low-carbon travel. The idea is to create a sports park that is not an enclosed theme park, but rather a place that is truly integrated into the city and the daily lives of its citizens. 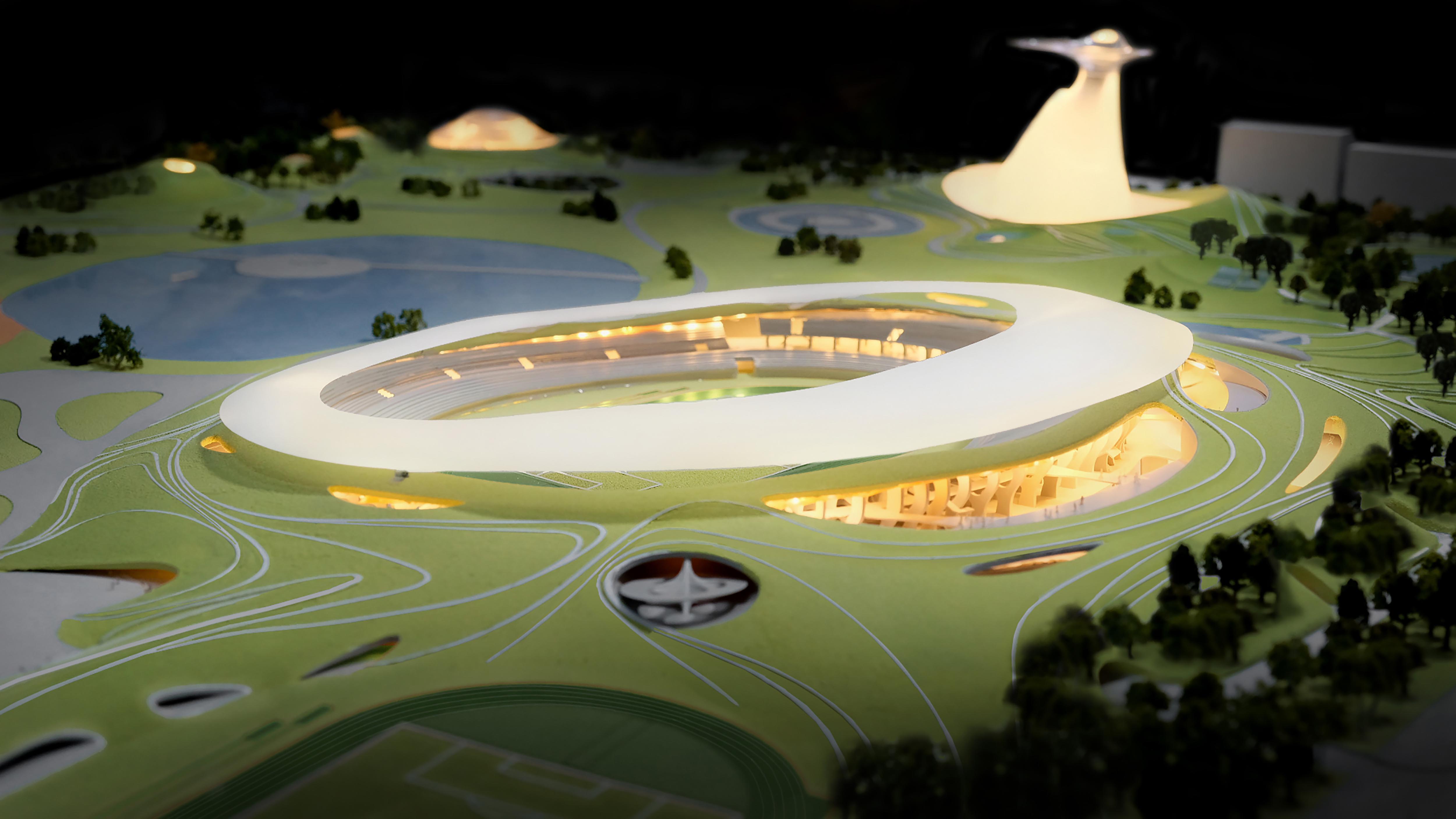 Eventually, all complicated technical details and challenges will disappear into human behavior and its appeals for aesthetics. Using imagination as a driving force, the complex, while dedicated to competitive sports and training, will also become a place for leisure activities for the public. The buildings are integrated into the terrain, transcending practicality, functionality and expressing aesthetic appeal. They are a statement of competition and everyday life, and also an expression of art.