“When building a cultural landmark on a site positioned between the dynamic energy of a modern city and quiet timelessness of nature, it should be imagined as a free civic space – at first a land art park, with its functions complementing its aesthetics.” – Ma Yansong

MAD Architects, led by Ma Yansong reveals its masterplan and architectural design for the “Shenzhen Bay Culture Park.” The ambitious cultural complex covers an approximate area of  51,000 square meters, with a total building area of ​​182,000 square meters, and includes the Creative Design Hall, the Shenzhen Science and Technology Museum, with an expansive public green space along the waterfront in Shenzhen, China. It is expected to be completed in 2023. 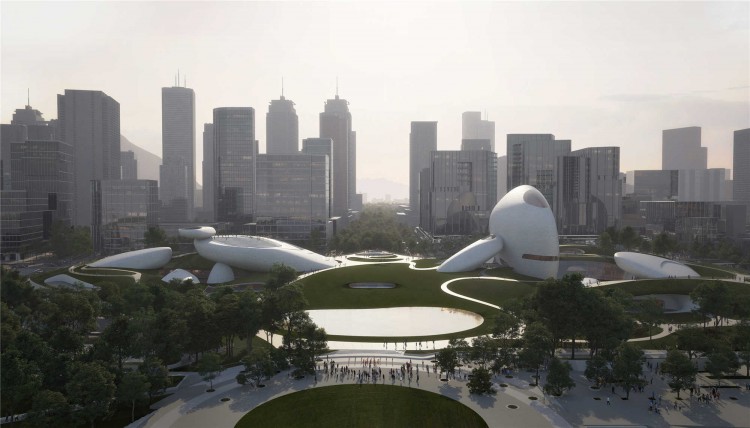 Set between the young vibrant city of Shenzhen, and the quiet oceanfront, “Shenzhen Bay Culture Park” juxtaposes two transcendental scales of time – the ‘ancient’ and the ‘future’ – through the setting of an ethereal artistic urban landscape.

“I want to create a surreal atmosphere, so that the people who visit, relax or exercise here have the possibility of engaging in a dialogue with the past and the future. Time and space are dissolved and placed against each other, manifesting a sense of weightlessness, and unrestrained imagination,” says Ma Yansong. 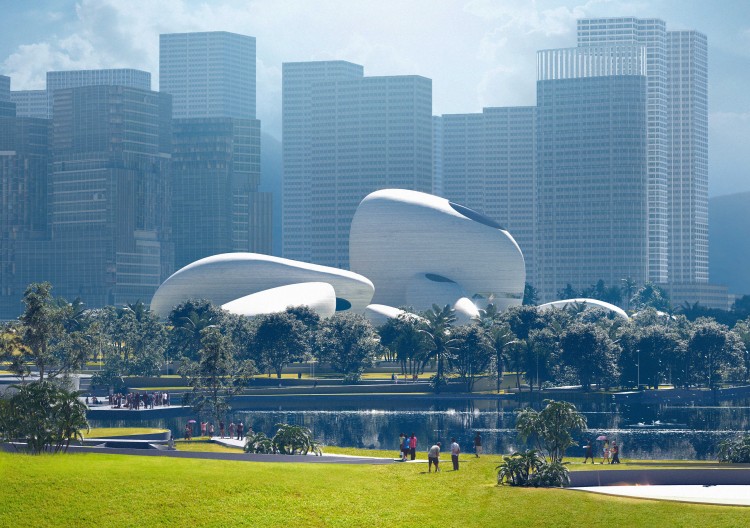 MAD’s scheme is formed by a sprawling green plaza. A reception area, standard exhibition halls, public education space, library, auditorium, theater, café and supporting business are spread out across the ground floor. Sunken into the terrain, these programmatic functions remain unseen. Instead, they are visualized as an earth-art landscape. Pedestrian pathways that lead directly from the city over to the park, freely connect the greater urban area and public green space to one another. The gentle sloping of the roof naturally falls into the ground, shaping several sunken courtyards of continuous height across the park.

“Architecture should be integrated into nature shaping a landscape where one can find spiritual belonging in the city.”
– Ma Yansong 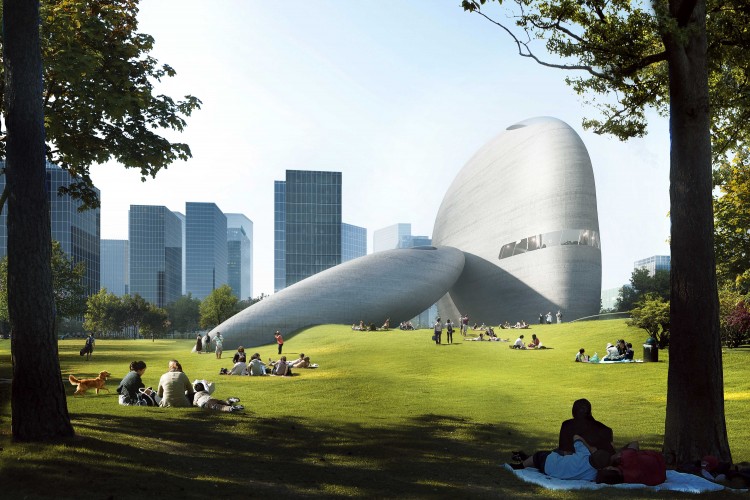 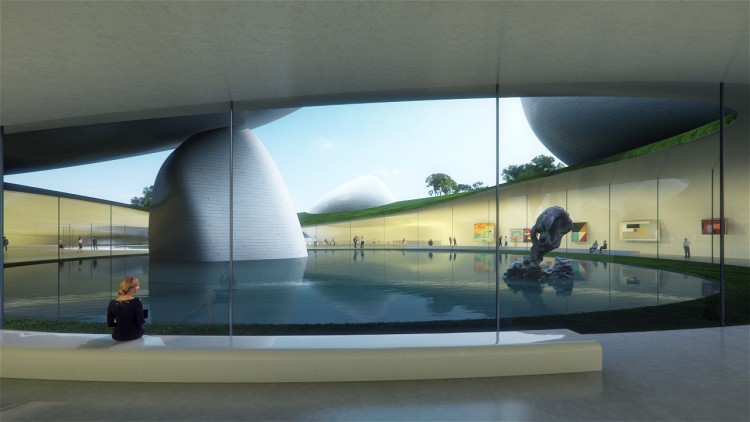 The sweeping green roofs and recessed courtyards form the foundation of this ‘three-dimensional’ citizen’s park. It not only serves as a 24-hour open public space, but it also functions as a performance venue and exhibition area. A mirrored pool at the heart of the site serves as an en plein air seaside amphitheater that can accommodate 10,000 people. Multiple platforms found across the enduring landscape provide outdoor performance venues and public art exhibition areas shaping a dynamic civic space for hosting art and music festivals, and other domestic and international events – a place of cultural exchange. 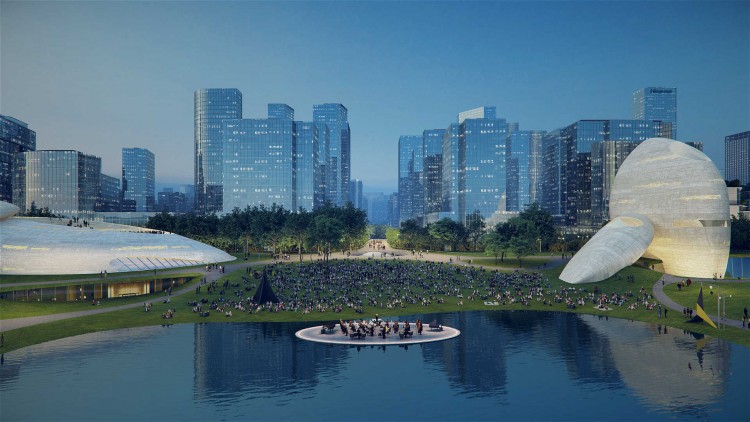 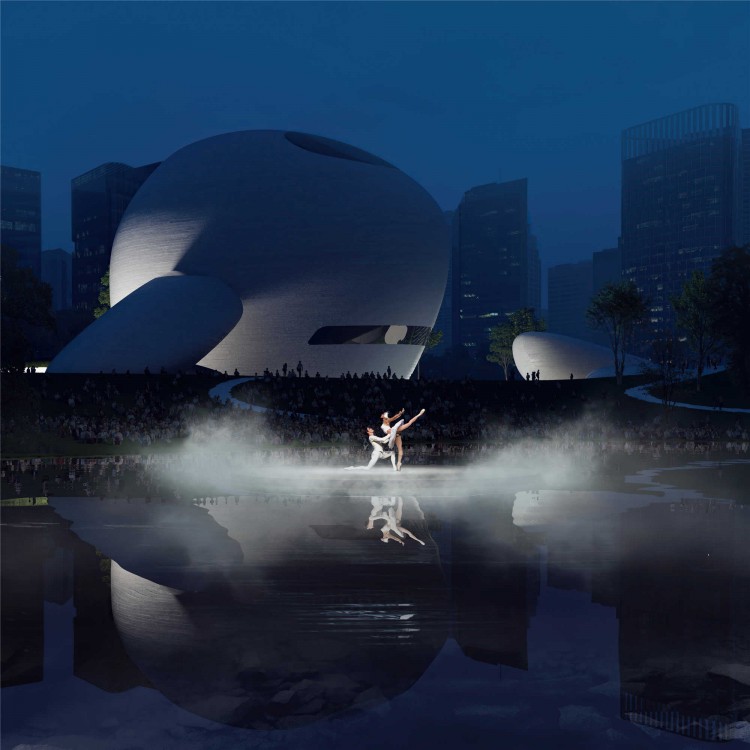 The park is an extension of the city’s main road towards the water. Pedestrian walkways and cycling paths weave between the buildings and across the sprawling lawn, providing citizens with an expansive recreational space along the waterfront. 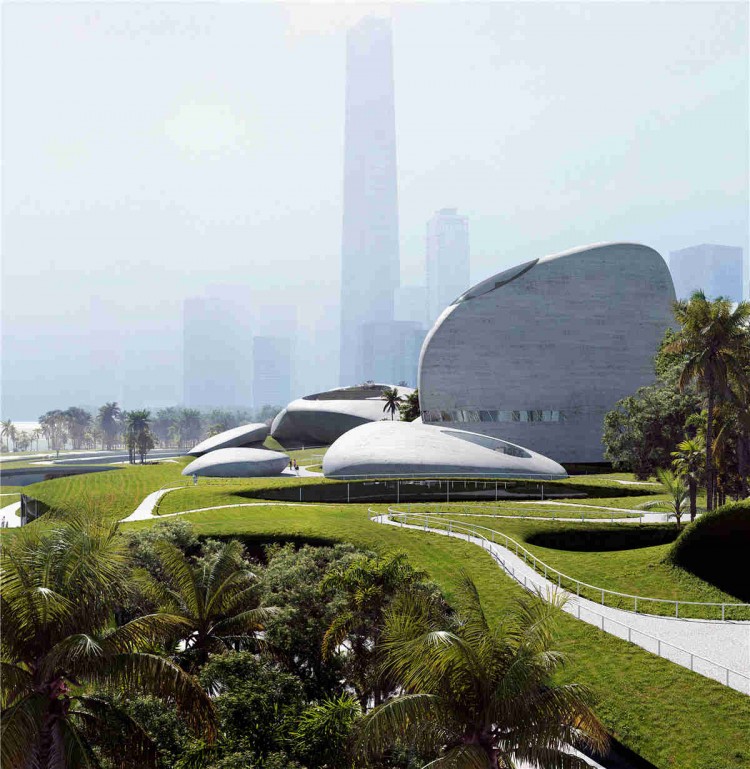 The north and south pavilions each sit on opposite sides of the axis, and stand as smooth monumental stones, quietly settling into the environment. They sit backed by the city’s powerful development, and face the open calm of nature and the ocean in front of them, uniquely marking the passage of time. 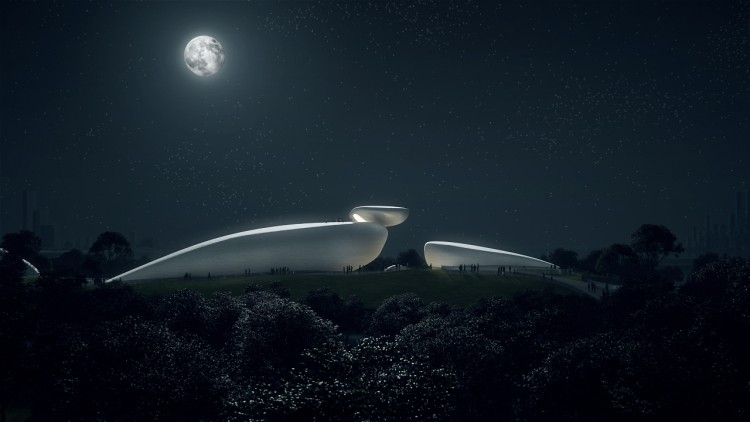 Along the top floor of the south pavilion, visitors can walk through the exhibition space to reach a viewing platform that overlooks Shenzhen Bay and the city skyline. The special exhibition hall’s highest space soars to 30 meters. The unique gallery can accommodate a diverse display of large-scale installations, videos, multi-media, and performances, delivering stunning architectural spatial effects. 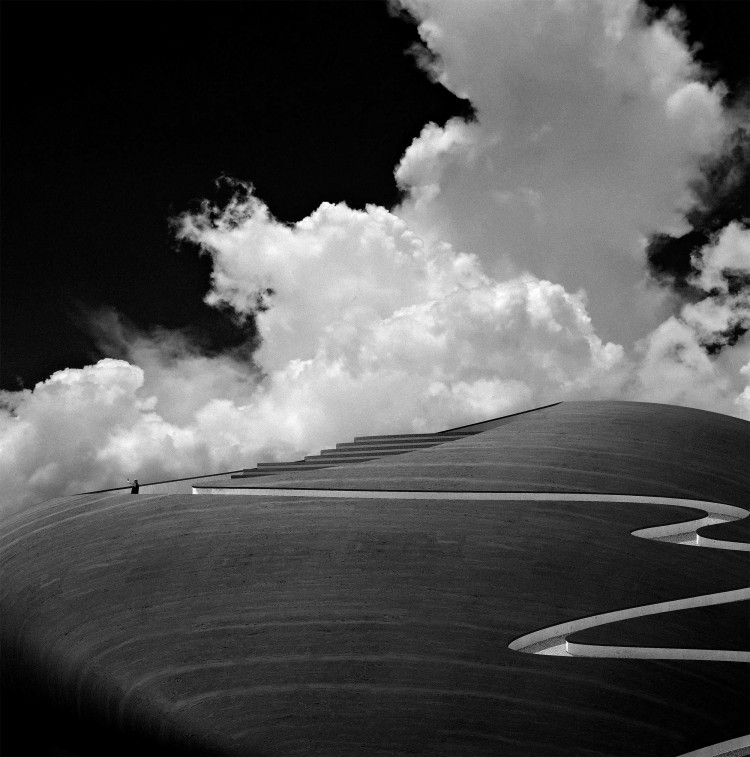 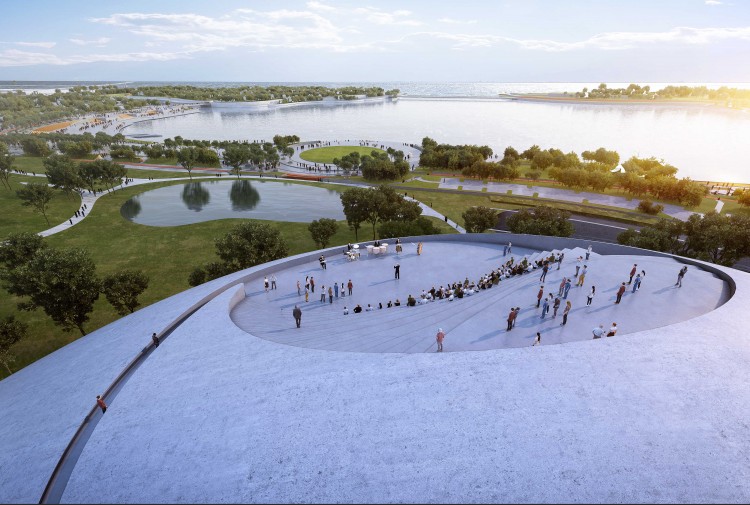 Floor-to-ceiling windows and skylights throughout the main public space on the first floor, wash the interior with natural light, while also drawing the natural scenery and spirit of the park inwards, blurring the division between the indoors and outdoors. 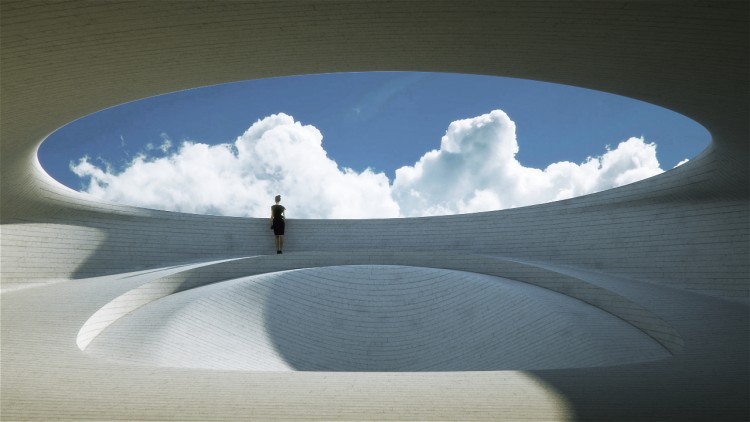 The main public area has several standardized exhibition halls that can host a range of works, such as sculptures and special collection displays. The versatility of these exhibition spaces allows them to accommodate a variety of programmatic needs. 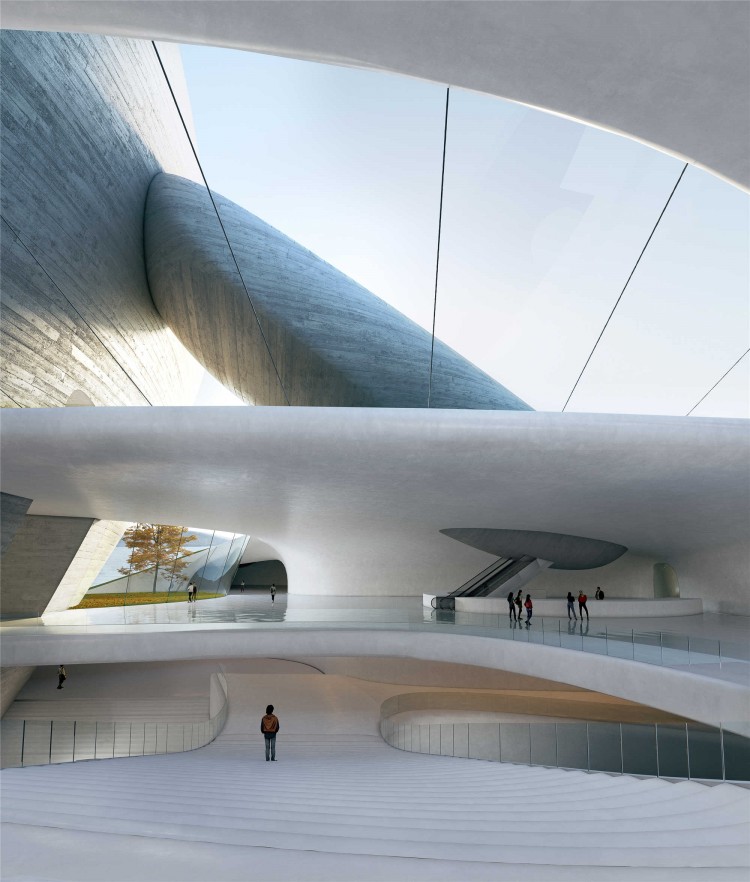 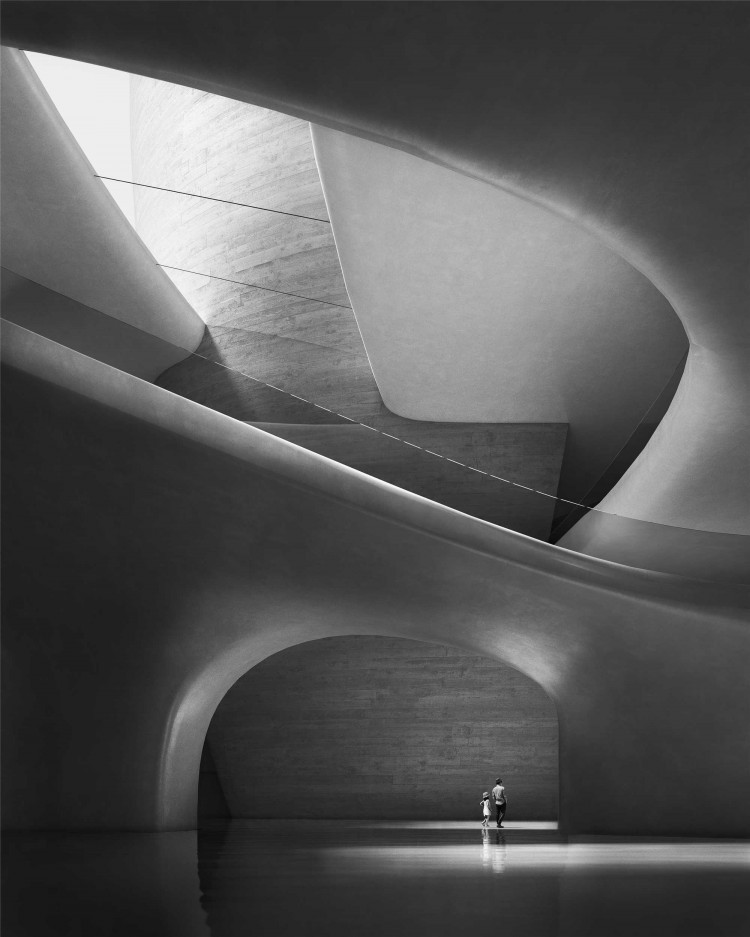 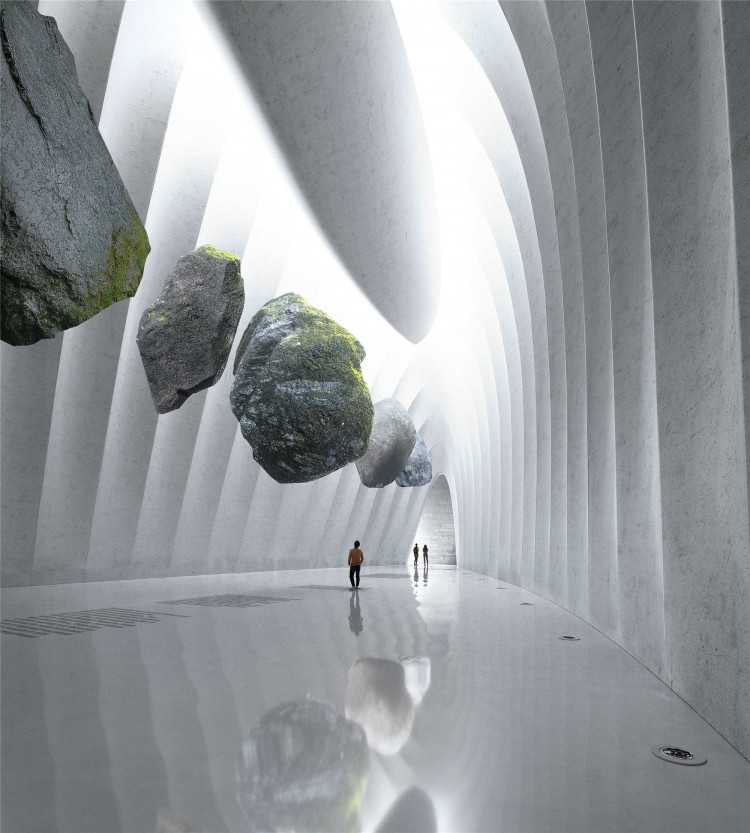 The “Shenzhen Bay Culture Park” is located within the Houhai area of Shenzhen’s Nanshan district. In the past decade, the economy of this area has developed rapidly into the city’s financial and innovation hub. In 2019, the GDP of the district exceeded 600 billion RMB. It is home to world-class enterprises such as Alibaba Cloud, Huawei,  and Tencent, which has coined it the nickname “China's Silicon Valley.” The numerous high-rises that have emerged as a result of economic and technological development now stand as a contrasting backdrop to MAD’s design. As the city thrives economically it now seeks to establish itself on a more cultural level. The “Shenzhen Bay Culture Park” is one of ten new cultural facilities spearheaded by the Shenzhen city development, and represents Shenzhen’s ambitions of becoming a “city of culture with global influence.” 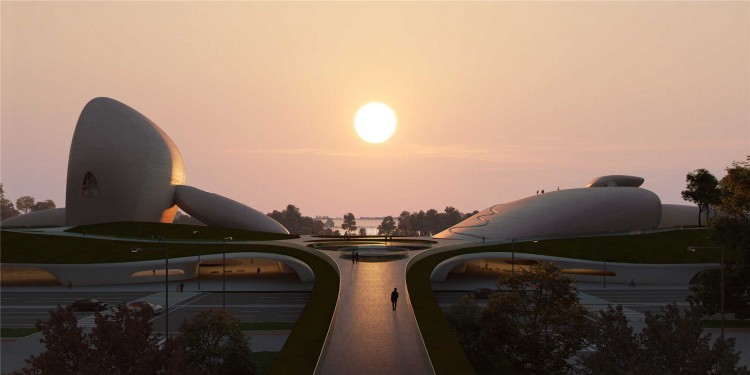 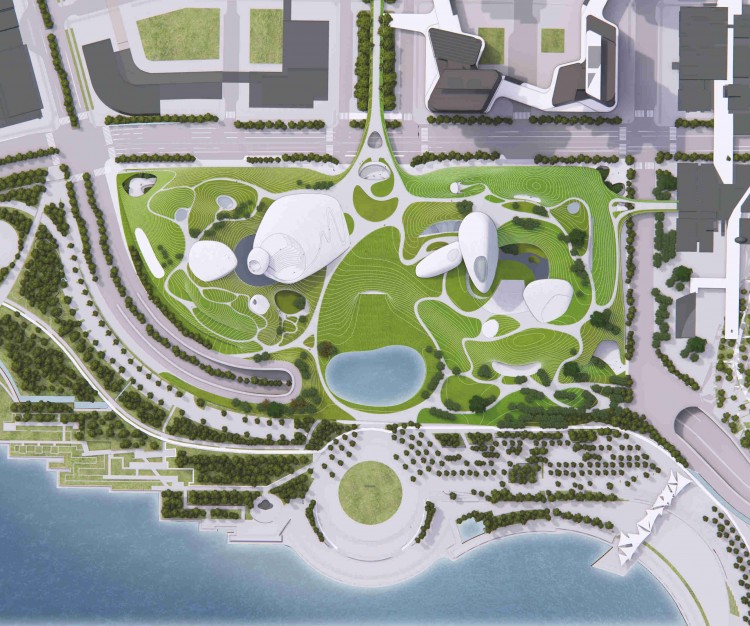 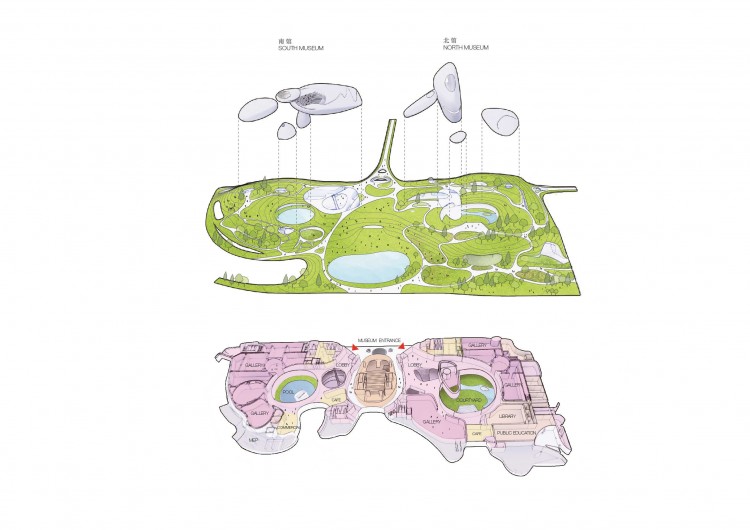 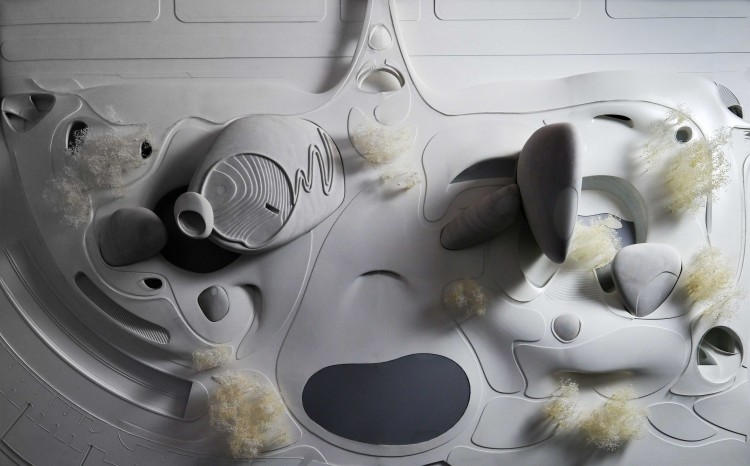 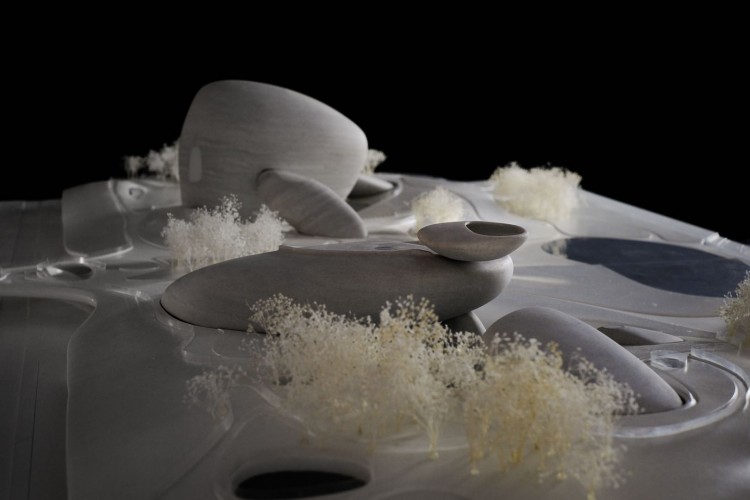