MAD Architects, led by Ma Yansong, has completed the restoration and reconstruction of a 305 sqm traditional courtyard house that dates back to the Qing Dynasty. “Hutong Bubble 218” is a continuation of MAD’s exploration into urban renovations as a means of revitalizing the Chinese capital’s old neighborhoods that have been confronted with degradation and demolition as a result of rapid development. MAD’s renovation demonstrates how small-scale, artistic interventions can provide new spaces and programs for these adverse areas, creating a dialogue between the old and the new. 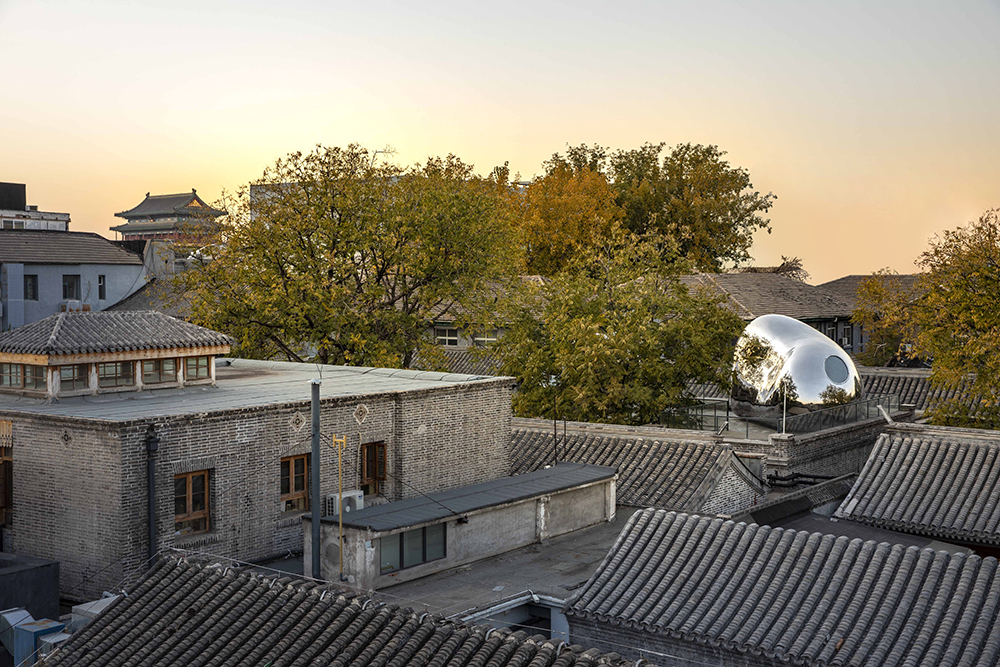 In 2006, at the Venice Architecture Biennale, MAD proposed ideas for the future ambitions of Beijing, whose urban landscape, as a result social and economic developments, had started to alter, eroding the city’s delicate urban tissue. “Beijing 2050” imagined different scenarios for the city, including the ‘Future of Hutongs’. With the ideology that progress does not necessarily require large-scale change and construction, MAD conceived a network of metallic bubbles to be cultivated in Beijing’s historic neighborhoods. Inserted into the city’s existing urban fabric, they were envisioned to attract new people, activities and resources back to these aging and neglected communities.

“This is a micro-utopian ideal. I hope that these bubbles will serve as vital newborn cells, giving the traditional hutong new life, and revitalizing the community.” – Ma Yansong 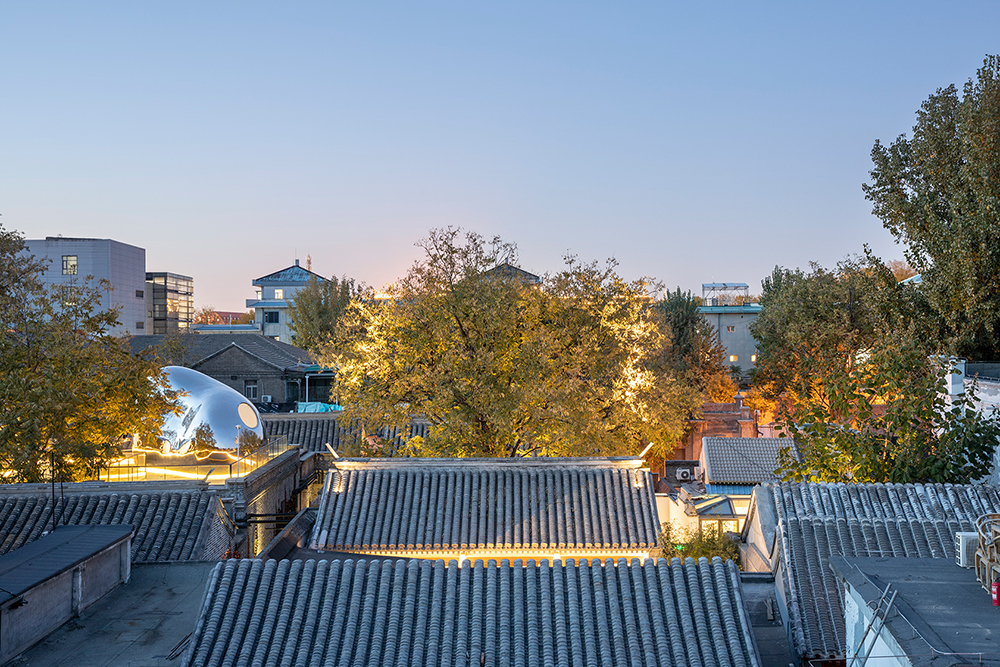 “Hutong Bubble 218” is the result of MAD’s participation in the Old City Renewal Research Program which launched in 2014. Co-sponsored by Tianjie Group, the Beijing Center for the Arts and Beijing Architectural Design and Research Institute, the initiative invited domestic and international architects to renovate several sites in Beijing’s historic city center. For this research project, MAD focused on four principles: historic preservation, urban regeneration, re-energizing the community spirit and small-scale intervention. 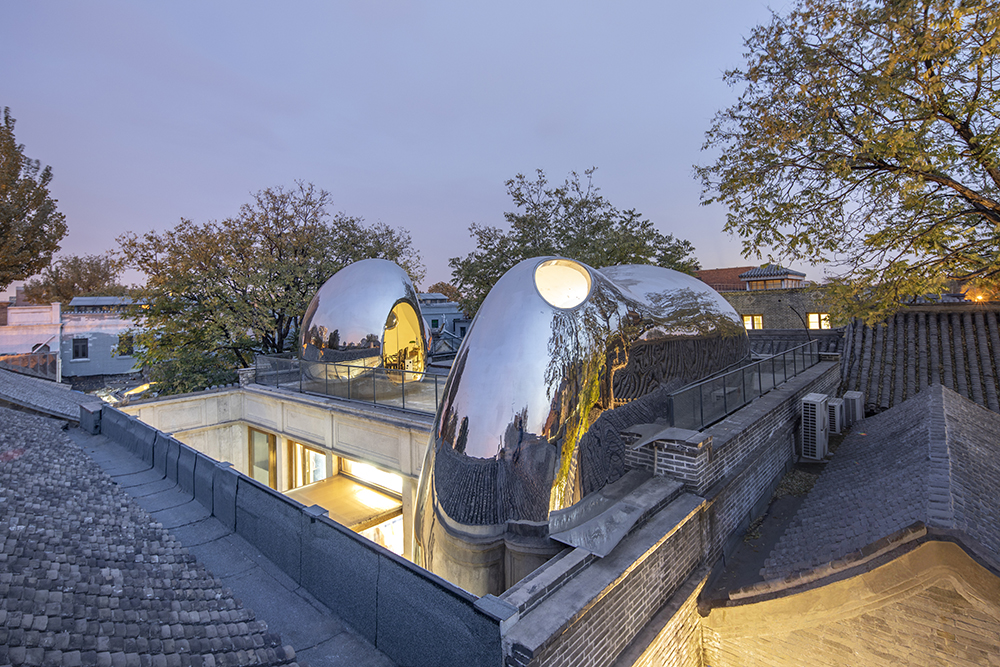 Located in the Qianmen East area, close to important cultural landmarks like the Forbidden City and Tian’anmen Square, “Hutong Bubble 218” embeds itself into the neighborhood just off Xidamochang alley. The building was erected in the latter part of the Qing Dynasty. Covering an area of 469 sqm, it originally served as the city’s first international hospital for over 100 years, before being converted into a residence inhabiting more than 20 families. Overtime, the courtyard underwent restructuring on multiple occasions. Residents also created their own make-shift additions, eventually leading to structural degradation. With the gradual decline in living standards, the building lost its charm, deteriorating and becoming vacant, as most of the households moved out. 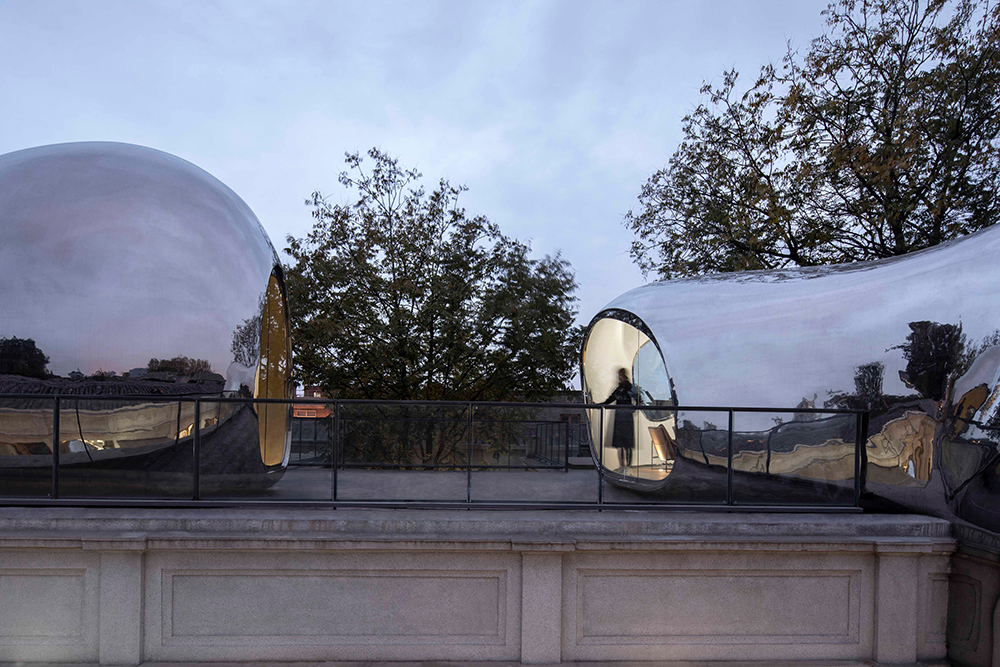 One connects the first and second floors with a staircase. Puncturing through the roof landscape, it emerges onto the terrace and functions as an independent meeting room/shared workspace, and flows over the edge into the front courtyard. Another bubble appears as if it has landed on the rooftop of the building. While they may seem foreign in their historic context, a mysterious aura emanates from these futuristic and surrealistic forms. Their smooth mirrored surfaces reflect the ancient buildings, trees and sky within the vicinity, blending into the environment. Instead of interrupting the existing urban fabric, the old and new complement one another. 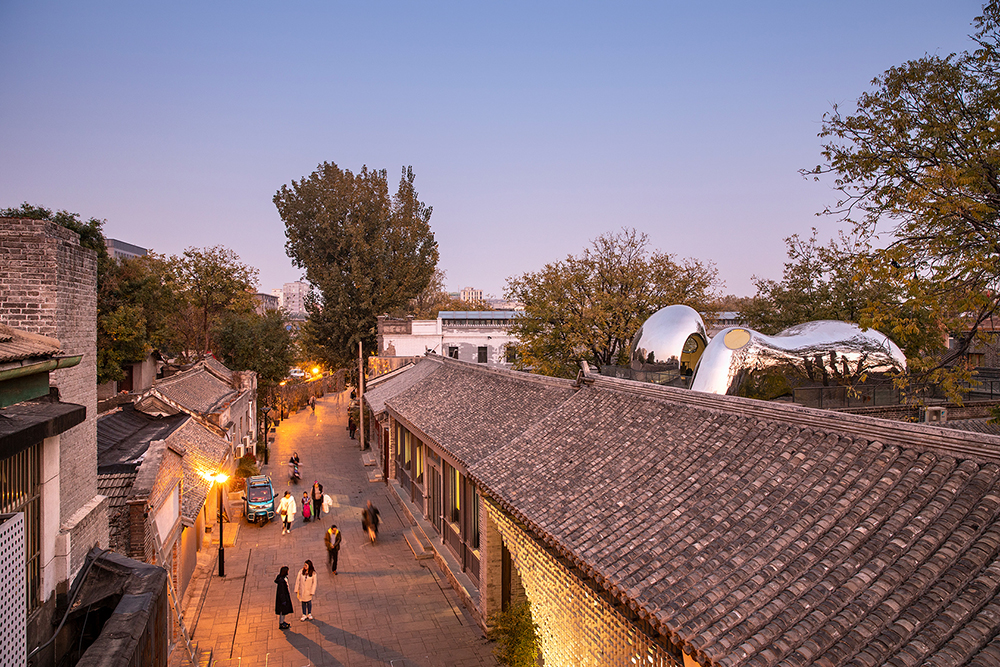 MAD’s scheme not only realizes a new construction, but also conserves and restores the authentic architectural aesthetic of the courtyard building to their original glory. The aesthetic temperament of the old Beijing courtyard is retained through the use of gray bricks, which have come to define hutong building constructions. The glazing along the street front has been replaced with single transparent glass, maximizing the amount of natural light that floods the interior. From here, no one suspects the existence of the bubbles beyond. 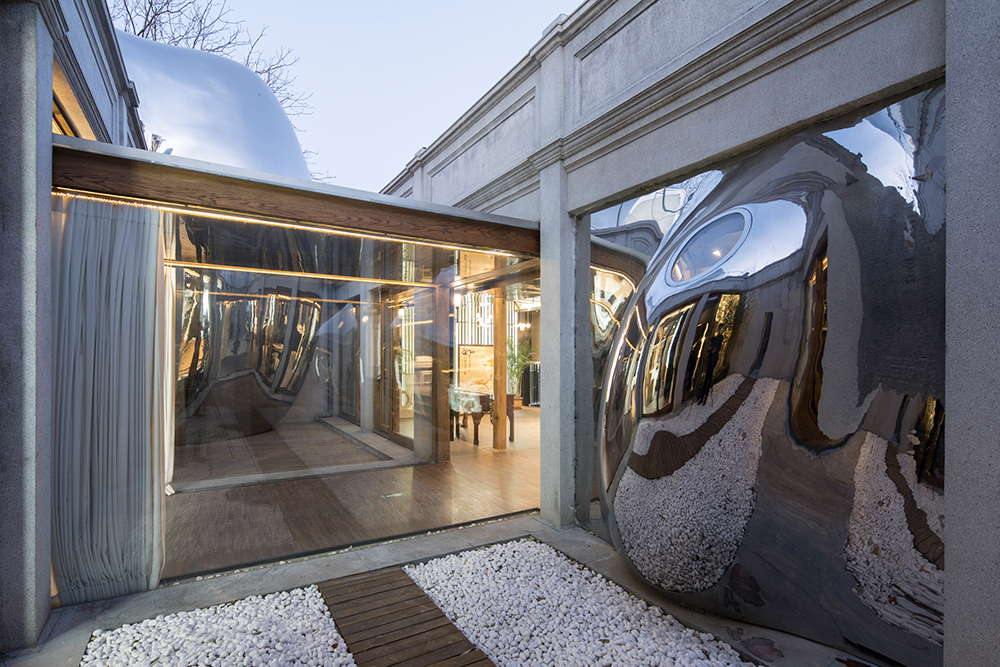 The inner courtyard was restored following the original layout of the space. The wood filigree panels that lined the inner courtyard have been stripped of their stains and returned to their original luster, with replacement sections reproduced with the same size and motif. The pattern and arrangement of the wooden door and window frames has also been retained, forming an elevation that is open.

As Chinese writer Lao She once said: “The beauty of old Beijing lies in the gaps and voids between the buildings.” 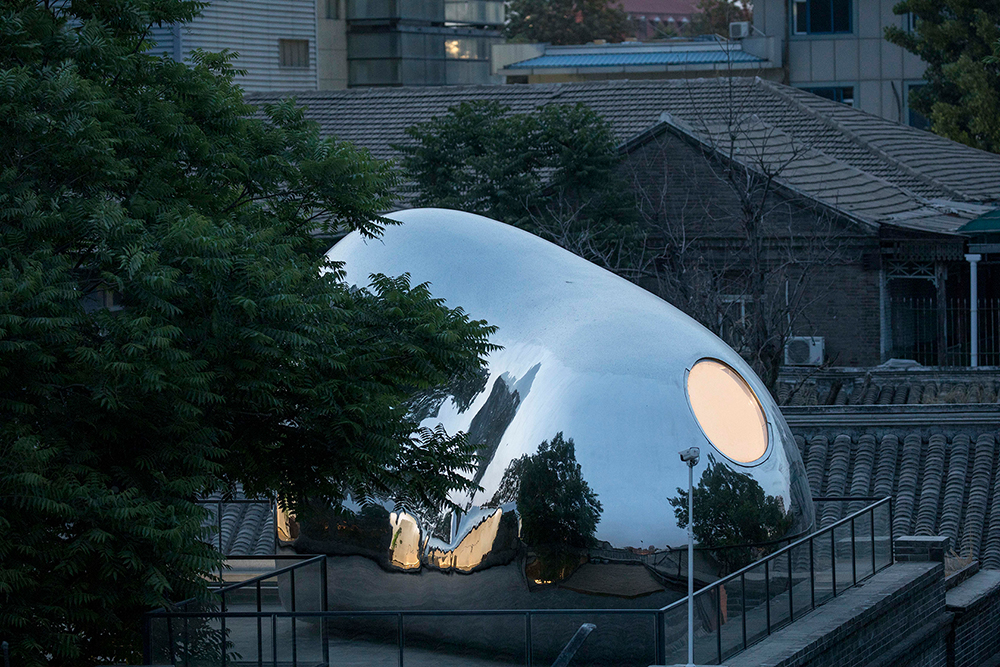 “Hutong Bubble 218” demonstrates how art and architecture can come together to renew a city. Through the insertion of small-scale interventions, people are attracted to return to traditional life, metabolizing the old district and creating a conversation between tradition and the future, nature and humanity, expressed in a freehand artistic way. 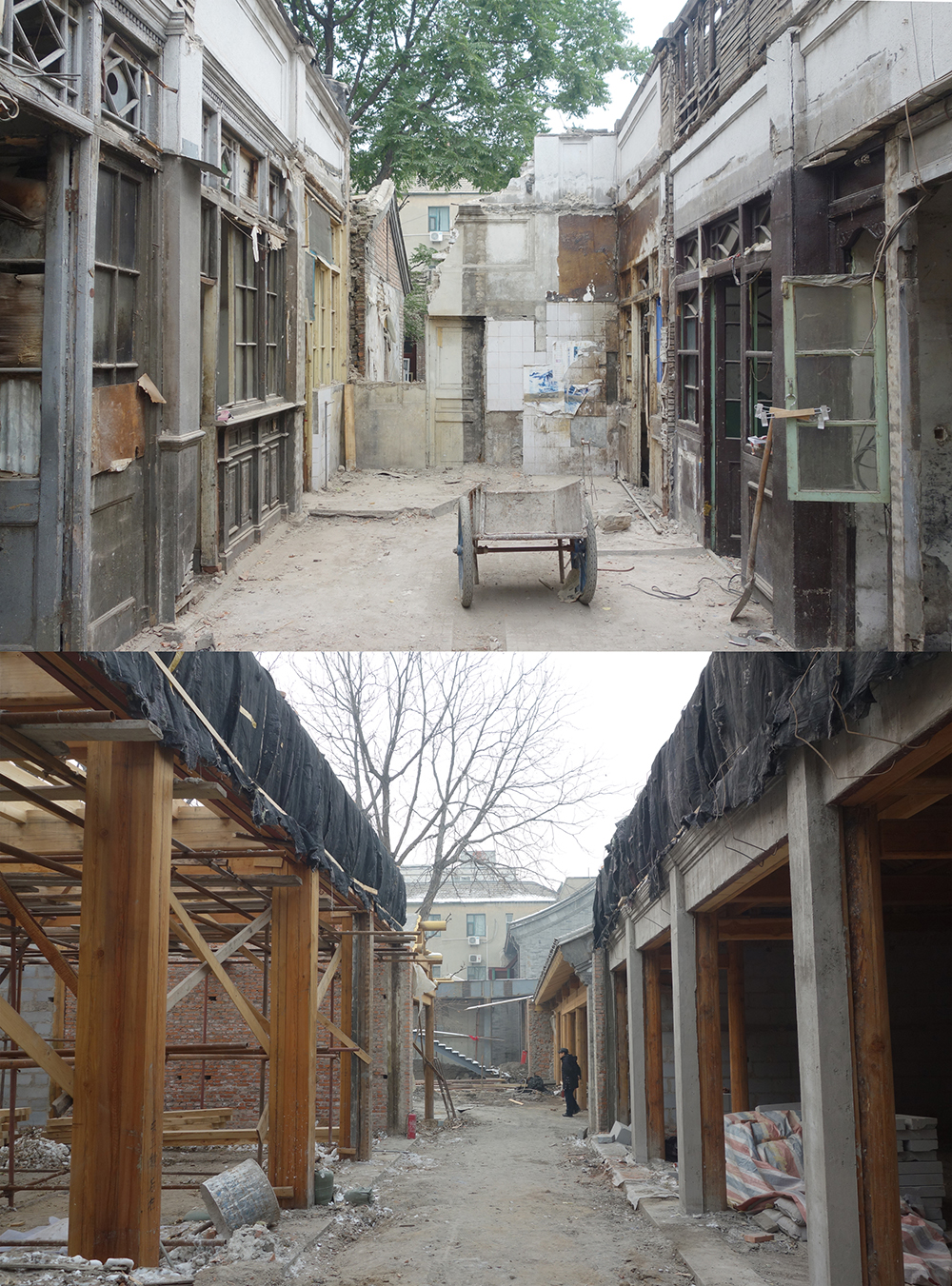