WAN Awards announced on May 3rd that Harbin Opera House is the winner for "2016 WAN Performing Spaces Award." In an award release statement, the WAN Award is impressed by this new cultural landmark with special natural context, and its emphasize in public interaction and participation with the building. Quotes from the judge Gerardo Broissin: "What an outstanding silhouette, you don't always get such a sophisticated shape with an efficient performance on its funcionality, a very difficult formula to balance." Judge David Staples also stated: "The quality of the public spaces is superb and the soft shapes are beautiful." 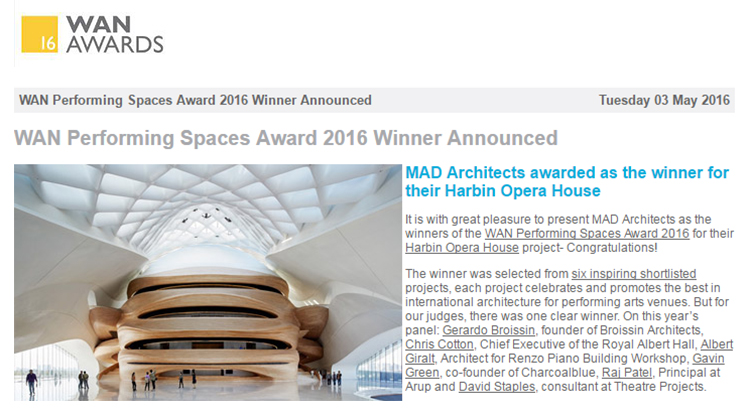 Embedded within Harbin’s wetlands, the Harbin Opera House was designed in response to the force and spirit of the northern city’s untamed wilderness and frigid climate. MAD Architects envisions Harbin Opera House as a cultural center of the future - a tremendous performance venue, as well as a dramatic public space that embodies the integration of human, art and the city identity, while synergistically blending with the surrounding nature.